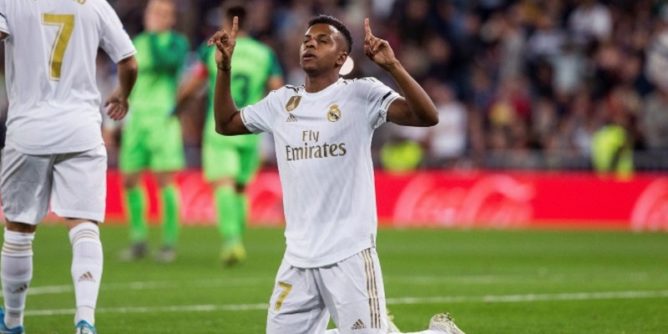 Real Madrid boss Zinedine Zidane heaped praises on Brazilian youngster Rodrygo after his hat-trick in the 6 nil rout of Galatasaray at the Bernabeu in the UEFA Champions League on Wednesday.

The 18-year-old found the back of the net twice in the opening 7 minutes of the game before scoring a third during stoppage time to cap a very impressive performance.

Before the third, he set up Karim Benzema to score the first of his two goals after Sergio Ramos converted a penalty. The Frenchman’s second was his 50th for the club in the UCL, with the result setting up a showdown encounter against group leaders PSG in Spain in three weeks.

The Ligue 1 outfit currently lead the group with 5 points although Zinedine Zidane’s men would want to put a slow start to the competition behind them.

Meanwhile, when asked about Rodrygo’s performance on the night, Zidane replied: ‘We are happy for him because in the end when he gets the chance to play he plays well, and he did so again tonight.

‘He plays well in every sense. We know his qualities in attack well, but he also works hard in defence and helps out with a lot.

‘But we need to keep calm and not put any pressure on him.’