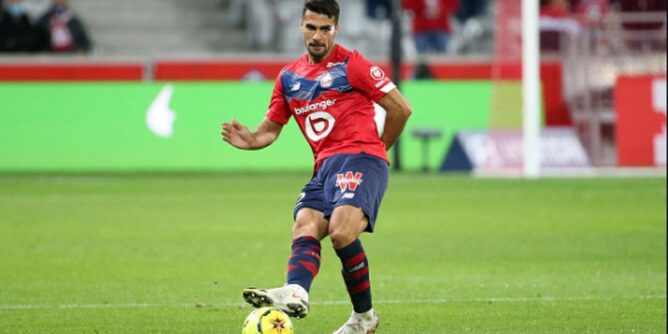 According to reports, Arsenal, Manchester United, and Tottenham are interested in Lille right-back Zeki Celik. The 24-year-old enjoyed a good season with Lille as he played his part in their Ligue 1 triumph and he is expected to leave this summer.

Celik still has two years left on his current contract and is valued at €15million (£13m). The three aforementioned clubs are monitoring his situation at the club.

Celik will also represent Turkey at Euro 2020 this summer and would be willing to listen to offers from all three clubs although he’s also being considered by many clubs in Europe. The likes of Inter Milan are also looking at him as Achraf Hakimi could leave for Paris Saint-Germain this summer.

The Gunners are in the market for a right-back as Hector Bellerin is expected to leave. He s currently being considered by Real Betis but there are fears that they may not have the financial power to close a deal.

Celik is a possible contender to replace Bellerin at the Emirates as his performances at Lille caught the eye. The player is a skilled possessor of the ball and also poses an attacking threat when going forward. His ability to press and win possession high up the pitch is also a plus.

Presently, he fits Mikel Arteta’s profile at Arsenal alongside other options like Norwich’s Max Aarons who also impressed in the Championship as the Canaries regained promotion to the Premier League for the 2021/22 football season.

It is understood that Norwich are prepared to receive bids for the 21-year-old and have also identified Celik as a possible replacement. Regardless, the Turkish full-back is focused on making a bigger move.