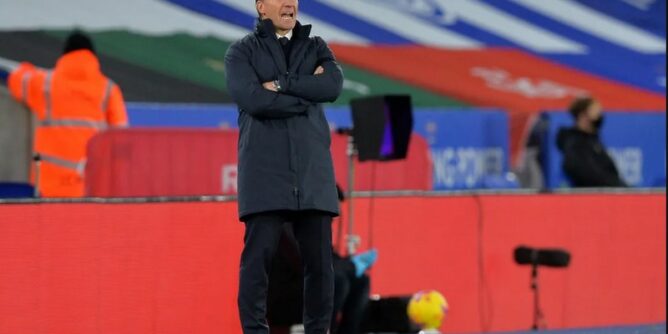 According to Leicester City boss Brendan Rodgers, they’ve shown this season that they have nothing to fear when facing any of the Premier League’s Big Six as they try to establish themselves within that group.

The Foxes will host Manchester City on Saturday in the Premier League and will draw inspiration from their 5:2 defeat of Pep Guardiola’s men at the Etihad back in September.

The result propelled them to beat the likes of Liverpool, Chelsea, Tottenham, Arsenal, and recently Manchester United in the FA Cup, all in the course of the ongoing 2020/21 campaign.

Brendan Rodgers’ men have already taken 16 points from 8 league games against the aforementioned sides, 7 more than they did last season and this is one of the reasons why they are third on the log, 5 points above 4th placed Chelsea and 7 above 5th placed West Ham.

“It’s always very, very difficult playing at this level but we’ve shown as a collective when we can play to the highest level of our game we can really compete with the so-called ‘Big Six’,” Rodgers said.

“We’ve been able to do that in a lot of the games. It comes from a maturity, it comes from the time working together and from the players. Once you’ve had one or two victories you get the belief you can do it more.

“It’s something we have consistently done this season and I hope by the end of the season it’s even more points.”

Manchester City lead their local rivals who sit second with a whopping 14 points and can afford to relax but Rodgers noted that his side still have all to play for.

The Foxes have been in the top 4 from the first week of the season and are on course for a return to the UEFA Champions League unless they bottle it in these latter stages of the season like they did last term. With this experience, Rodgers is taking nothing for granted.

“I’ve always said it’s about finishing as high as we can,” he said. “That’s what we want to achieve, that’s our aim. I said that on the first day and I’ll say it on the last day.

“It’s highly unlikely we’ll catch Manchester City but we’re one point away from second so we have to keep looking forward and after 38 games we’ll find out where we are.

“I’ve said before we’re not in the top four. We’ll only be there if we’re there after 38 games. People will try to add some pressure because we’ve been around the top four all season, ‘Will you stay there?’, but that doesn’t concern me.

“Great, we’ve been there but it’s about where you finish. We aim to finish strong.”

Rodgers’ comments also show that he may not be getting carried away by the top 4 talks.

“It’s just constant reinforcement, constant managing of the energy of the players,” he said of his message to the squad. “Not to waste time on any narrative, good or bad. We can only focus on ourselves.

“We don’t know what Manchester City will bring this weekend, or West Ham next weekend, but we can do everything we can to bring our ‘A’ game and see where it takes us.”