Ravens Top Plays and how Newbies can Understand Them

It seems that year after year, the worldwide viewership of the NFL and American Football is on a pretty steady incline. With more and more people, not only gaining access but finding themselves interested in the sport.

Whether that be due to seeing incredible plays in clips on social media or the ever-growing spectacle that is the Super Bowl, even people who aren’t interested in the sport find themselves drawn into watching that, even if it’s just purely because they’re amazed by the cost of advertising slots.

Today we will be doing something to help some of those new fans. We’ll take a look at a few of the best plays, specifically from the Baltimore Ravens.

We’ll be breaking them down and going through what makes a good play a good play so that the newer fans of the sport can really get their eye in and properly see why most fans love the sport the way they do. So without further adieu, let’s break down a few of the Ravens’ top plays!

The Baltimore Ravens were founded in 1996. Today we’ll be looking at some of their best plays. Source: ABC

Starting off with an absolute DOOZY of a play. This one is from the Baltimore Ravens Super Bowl winning 2012-13 season. While it’s fair to say the game featured plenty of ups and downs for both teams, with more highs for the Ravens, one play stood out more than anything.

With the Ravens leading 21-6 at the start of the second half, San Francisco 49ers’ David Akers absolutely smashed the kickoff, like it was hit with Mjolnir itself. What happened next was absolutely outrageous.

As seen in the video above, It was caught in the Ravens end zone by Jacoby Jones, 9 yards into it to be exact. Using his strength and agility, AS WELL AS some absolutely incredible blocking work from the rest of his teams, Jacoby Jones returned the kick off for a 109, yes ONE HUNDRED AND NINE YARD touchdown. Which set a new league record. For anybody new to the sport there are a few reasons this is impressive.

Firstly, 109 yards, I mean, really? When you see teams return a kick off, USUALLY you’ll see them make it 25-35 yards? PERHAPS the halfway line? Depending how quickly the kicking side can pounce and cut off the run.

But the fact the Ravens absolutely shut down any pressure in the midfield from the 49ers, while Jacoby Jones, as if using Ultra Instinct, just dodges everything thrown at him for one of the most outrageous Super Bowl touchdowns ever seen? This one is incredible, no other words for it.

The next one I want to talk about is another from the 2012 season, this time however against the Denver Broncos, the Ravens find themselves trailing by 7, 43 seconds on the clock on 3rd & 3. Nailbiting moments, their season rests on this next play.

As you can see in the video above, once more. The Ravens SOMEHOW get Joe the space he needs and Jacoby Jones, yes, Jones again, loses his runner down the right hand side. Flacco lofts a HIGH lobbed pass, 70 yards, over the head of ANY Bronco player hoping to intercept. CAUGHT by Jones, that pass couldn’t have hit safer hands. He converted the touchdown to take the game to overtime, where the Ravens won and the rest is history. Jacoby Jones really did have an outrageous 2012-13 season, didn’t he?

For this one, there are a few things you need to know if you’re looking at it from the outside. Firstly, there are fewer situations in football with higher pressure, of course, the super bowl final is an exception. But this is playoff football, in the closing moments of the game, EVERYTHING is on the line. Their season rests on this last play. If it’s intercepted, or if the pass isn’t completed, it’s all over and they don’t lift the trophy that season.

Secondly, you have to look at the snap, the start of the play. It’s perfectly released so Flacco doesn’t even have to WORRY about fumbling it, he knows exactly where it’s going and how fast it’s going so he can look up at where he needs this ball to be sent.

THEN the team around him blocked every challenge on him, giving him the space he needs to let loose a perfect lobbed pass SEVENTY YARDS!? Finally, the fact Jacoby Jones was patient enough to let that ball drop over the defending Broncos’ heads perfectly into his safe hands, a lot of players would’ve panicked in that situation and jumped up for the ball, but not him. He had faith. That faith paid off. Incredible.

It’s that time when we take a look at upcoming fixtures in the NFL, we’d usually take a look exclusively at the Baltimore Ravens, but given they have a bye week this week, let’s take a look at some of the teams around them first. Sitting 6-3 in the AFC North, the closest team to

the Ravens right now in the AFC would be the Bills, they’re sitting 6-2, they play the Vikings at the Bills stadium on Sunday with the Vikings 7-1. Surprisingly the Vikings find themselves +167 underdogs here returning $13.35 from $5. The Bills however are at -192 returning $7.60 from the same stake.

If you’re looking at the best way to use your bonuses for your betting play in MD and fancy checking out the Ravens’ next fixture, they don’t actually play again until 20th November HOWEVER! With their first game back after their bye week, they will host the Carolina Panthers who currently sit 3-7 so as you can imagine, the Ravens are HEAVY favorites here, at -750, returning $5.66 from $5. The Panthers are at a whopping +525, the biggest odds that game week, returning $31.25 from $5!

But what about for the Ravens to go all the way, the last time the Ravens went ALL THE WAY and lifted the trophy was back in the 2012 season when they beat the San Francisco 49ers 34-31. 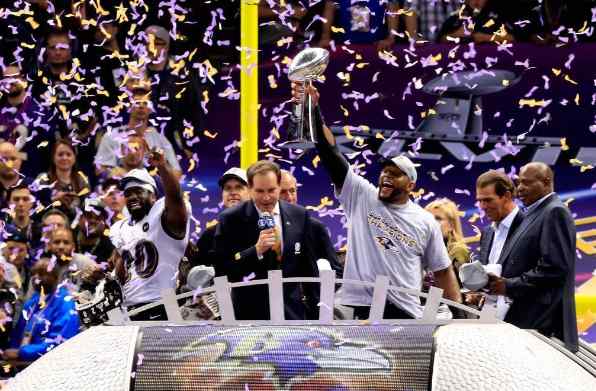 The Ravens lifted the Lombardi Trophy after a close Super Bowl against the 49ers, could they do it again? Source: Bleacher Report

SO! Ravens fans, how’d it feel looking over those plays again? It really was an incredible season. If you folks were the ones in charge of putting together this article. Are there any big plays you would’ve put on this list?

In fact, if you were trying to sell the sport to newcomers and you had to show some of the greatest plays of all time, let’s not just talk about the Ravens here, we’re talking football in its entirety, you make friends with someone who has never been into football before, but they’re interested after hearing you talk. You have 3 plays to show them, from ANY TEAM in ANY GAME. What 3 plays do you show them?

And that’s going to be it for this one. We’re ABOUT at the halfway point of the season right now, so let’s add to the discussion we just started. Besides the top 3 plays of all time. How are your teams doing this season? We’d like to hear from you guys, what have you loved this season, and what have you hated?

Is there anything, in particular, you’d like to see from your team, for reference “more wins” isn’t a valid answer? Also, if you’re an Eagles fan, yes we get it, your team is flying high right now. But there is still a long way to go! Until next time football fans, take care!