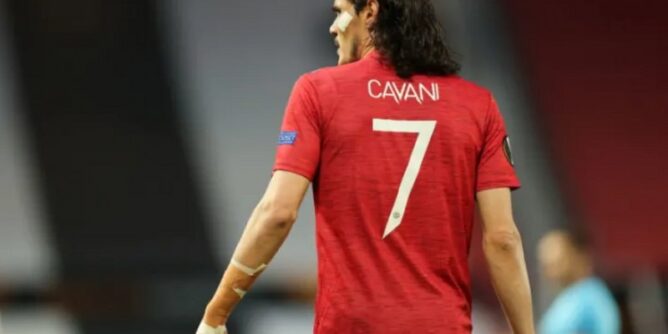 Man United striker Edinson Cavani has reportedly agreed to stay put at Old Trafford for another season. It can be recalled that the 34-year-old striker joined the Red Devils from Paris Saint-Germain last summer, signing a one-year deal with an option to extend by another year.

Regardless, in the early stages of the year, his dad revealed that the striker was not comfortable and was likely to join Boca Juniors next summer. Therefore, it was believed that he would leave Old Trafford after this season.

However, the striker has been in good form for the Red Devils in these closing stages of the season and has scored 8 goals in his last 7 games, and looks set to stay on.

The BBC reported that the player has reached an agreement for another year as issues affecting him at the club have been resolved. It was also revealed that the announcement of the extension would be made soon.

After the 6:2 defeat of AS Roma at Old Trafford in the semifinals of the Europa League, Man United boss Ole Gunnar Solskjaer voiced his desire for the striker to remain at Manchester United.

“He was out for seven months and he’d not been playing football for a long, long time before he came to us. He’s had his couple of injuries and he’s now worked really hard to get back fit and he shows his qualities. He knows my feelings. He knows that I’d love to have him for another year.

“We have spoken about it. I understand this year has been very difficult but I’ve promised him that Old Trafford and Manchester is a different place with our fans in the stadium.

“He must try to get that feeling, to be on our side. Manchester is a fantastic place to live. I’m doing my best so let’s see. Of course nights like this, hopefully we can get to the final and hopefully he can see himself being here for another year.”