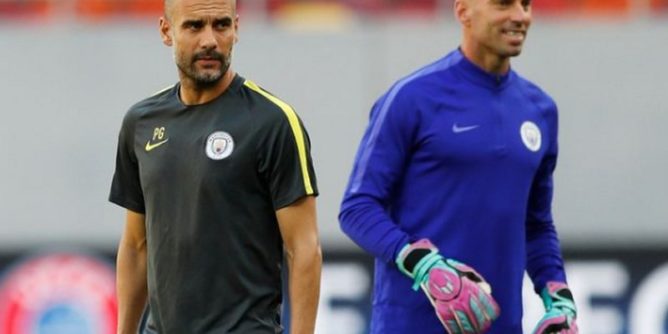 Chelsea goalkeeper Willy Caballero who was formerly at Manchester City has revealed that training under Citizens’ boss Pep Guardiola is like going to University.

The Argentine shot-stopper who worked under the Spaniard in his time at the Etihad is now the Blues’ second choice and was recently handed a contract renewal at Stamford Bridge. Caballero claimed that every day is a school day under Guardiola.

“I spent a year with him at City, learning something new every day.

“On the playing field, watching videos or at any time, when he approaches you and explains things to you.

“He has no problem teaching someone at 34 years old, as I was, like someone who is 18. He is a great teacher.”

Caballero spent three years at the Etihad and worked under Guardiola in his third season at the club having joined from La Liga outfit Malaga in 2014.

He followed former City manager Manuel Pellegrini who became City boss a year earlier before he joined. The Argentine was restricted to just 23 Premier League appearances at Manchester City but was a regular in cup competitions.

His major contribution was in the 2016 League Cup final against Liverpool where he saved three penalties in the victory against the Reds.

“Manuel Pellegrini had convinced me to go with him to Manchester City,” he explained.

“I was doing very well at Malaga, but I accepted. He had promised to keep me as a starter in the cup, although in the league, the starter was Joe Hart, the England national team’s goalkeeper.

“We reached the final and we had to play it against Liverpool. There was a lot of pressure for Hart to start the game.

“But Pellegrini said, ‘I’d rather lose a title than lose my word.’ It kept me going and we won the cup.”

Caballero went on to throw more light in his new contract at Chelsea which will see him remain at Stamford Bridge until 2021.

“I really appreciate having renewed for another year with Chelsea at 38,” he said.

“I always look back because I had a hard time getting to where I am. When I started at Boca, as well as when I got to the national team, I felt it was the top of the mountain, but they turned me around and I had to start from scratch.

“I went back to the second division in Spain and it served to give value to what I have now.”