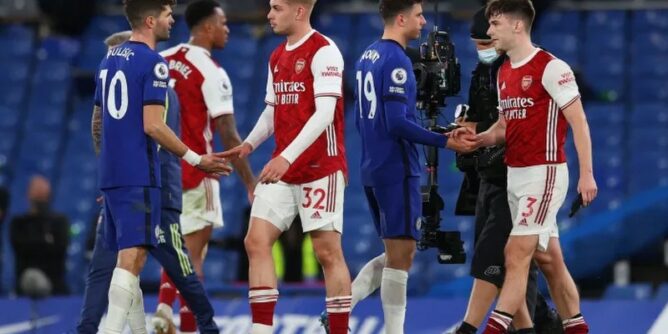 The 2021/22 Premier League season got off to a flying start as the goals flew into nets from various corners to round up an exciting Matchday 1 schedule.

One of the results that left folks stunned or maybe not due to the reputation of the losers on the night was Brentford beating Arsenal 2 nil at the Brentford Community Stadium.

The result has put Mikel Arteta’s job under the spotlight yet again as the Gunners were favorites for all three points.

Their next game in the Premier League would be against Chelsea at the Emirates in front of their home fans who won’t take any poor performance and result lightly.

As for the Blues, they got off to a flying start with an impressive 3 nil win against Crystal Palace at Stamford Bridge. They’ve now been tagged as favorites for all 3 points against Arsenal but Thomas Tuchel and his men would know better than to underrate Arsenal.

Both sides faced off in preseason and Chelsea came out tops but we know that such games count for little. Under Mikel Arteta, the Gunners have been getting the better of the Blues, and beat them home and away last season in the Premier League.

Funny enough, Chelsea were favorites when the game was played last season at the Emirates as Arsenal were coming off the back of zero wins in 7 consecutive Premier League games. They had lost 5 and drawn 2 from the 7 games, scoring just 3 goals and conceding 11 in the process.

However, Mikel Arteta’s men came to life against Chelsea at the Emirates and went 3 goals up before the Blues managed to score what ended up as a consolation goal in a 3:1 loss.

The second leg saw the same Arsenal beat them 1 nil at Stamford Bridge through a first-half goal by Emile Smith Rowe.

Therefore, Tuchel and his men will be wary of the Gunners as it is a potential banana peel clash for the Blues even with the presence of new signing Romelu Lukaku.

The Gunners won’t want to lose to a side they beat over two legs last season in front of a capacity home crowd that won’t be moderate with the boos and jeers if they fall short.

Meanwhile, both managers have their jobs cut out for them ahead of this game although Mikel Arteta will be under more pressure than his German rival.

We look forward to the first big London derby of the 2021/22 Premier League season and we know that nothing is cast in stone in this one.