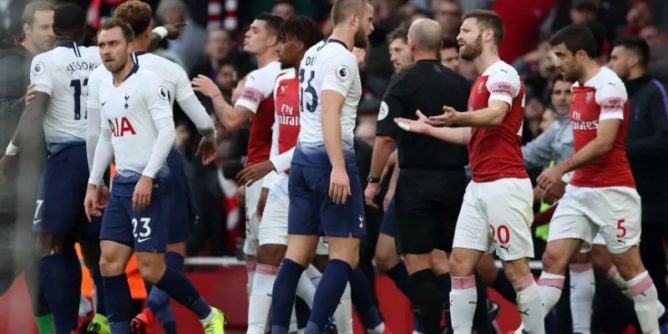 Arsenal and Tottenham Hotspur have been slapped with a fine totaling £95,000 for failing to control their players in the North London derby in the Premier League earlier this month.

It can be recalled that Eric Dier’s celebration resulted in a fracas as the players on Arsenal’s substitutes bench were not pleased.

The English FA in a statement released stated: “Arsenal and Tottenham Hotspur have been fined £45,000 and £50,000 respectively after both clubs admitted an FA charge of failing to ensure their players conducted themselves in an orderly fashion”

The hotly contested derby also saw a Tottenham fan throw a banana peel onto the pitch after Pierre-Emerick Aubameyang scored one of his goals on the day.

Both sides met in the Carabao Cup at the Emirates earlier this week and Dele Alli was struck on the back of his head with a plastic bottle after Spurs scored the second to secure qualification to the semi-finals of the competition with a 2 nil win.

The club have identified the perpetrator and are working closely with the police to arrest the suspect.

Arsenal are also said to be investigating anti-Semitic behavior by some of their fans in the course of the game on Wednesday. The club released a statement saying:

“Anyone identified will receive a lengthy club ban and their details will be passed to the police to commence legal proceedings.”