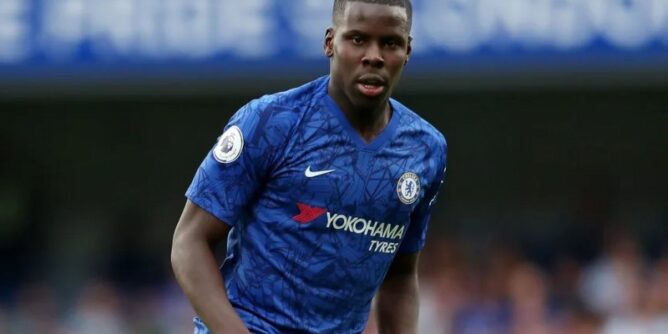 West ham United have secured the signature of KURT ZOUMA from Chelsea Football Club. The 26-year-old former Saint-Etienne defender penned a four-year deal for the David Moyes-led side after negotiations between the two clubs. The move is estimated to be in the region of £29 million.

Chelsea signed the defender from a French club side Saint-Etienne in 2014 for a reported fee of £12m and was loaned back to the same club to garner more playing experience.

He also had loan spells with Premier League clubs Stoke City and Everton before he was able to establish himself as a core member of the first team at Stamford Bridge.

Kurt made over 160 appearances for the Blues in all competitions and had lengthy playing time during the reign of club legend and former boss Frank Lampard.

Zouma started 15 matches out of 17 Premier League matches last season. He was an entrusted solder of Chelsea former coach Frank Lampard before he was asked to walk the plank.

Kurt was also an integral member of the French squad that participated in the Euro 2020 tournament. They couldn’t go far in the competition as they were sent home in the round of 16 by Switzerland via penalty shootouts. Overall, He’s been able to represent the French national team eight times.

Kurt Zouma’s 7 years at Chelsea were success-filled moments and lingering memories in his career. He won two Premier League titles, the League Cup, the UEFA Super Cup, and not forgetting his inclusion in the team squad that defeated Pep Guardiola-led side Manchester City at Estadio Di Dragao, Porto stadium, Portugal, in the UEFA Champions League final in 2021.

Regardless, it must be noted that after Frank Lampard was axed from the position of Chelsea head coach and was replaced by Thomas Tuchel, Zouma’s chances of regular football took a nosedive and dwindled because those ahead of him were preferred by the new gaffer.

As a young defender at his peak, he couldn’t afford to be a bench warmer, instead, he responded to the call when West Ham echoed for his signature.

The French international couldn’t have been happier to be joining the Hammers: “I’m very happy and very proud,” Zouma said.

READ: Mikel Arteta – An untested Rookie in charge at Arsenal

Kurt was called up for national duty and was among the selected players in Didier Deschamps’ France squad for the upcoming World Cup qualifiers.

Zouma would have his first appearance for the Hammers after the international break, he could be in selection for West Ham against Southampton at the Saint Mary’s on September 11 or against Manchester United at home the following week.

Zouma’s experience in Europe will be vital to the West Ham side led by former Everton and Manchester United manager David Moyes. He’d be an instrumental figure in their quest to test the water of European football for the first time in their history.

With the wealth of experience, he’s coming with, West Ham is a team to watch out for. They have been imperious since last season and their form hasn’t nosedive either in this campaign. Their show of character is beyond average.