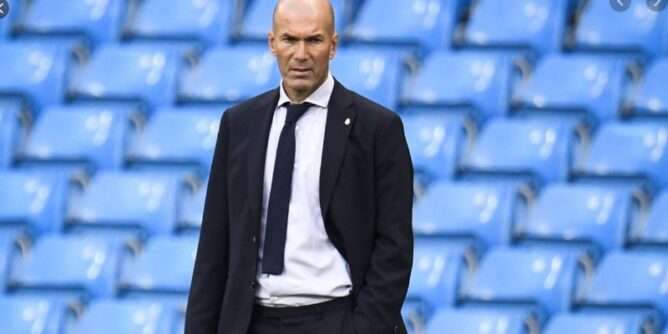 Real Madrid boss Zinedine Zidane has disclosed that he has no intention of resigning from his role despite the continued poor form after the 2:0 loss to Shakhtar Donetsk in the UEFA Champions League on Tuesday night.

It’s no more news that the 2020/21 season is not going to plan for the La Liga champions who sit third in their UCL group and fourth in La Loga, They’re in danger of crashing out to the Europa League if their fortunes do not change.

The loss on Tuesday took their recent poor run to 1 win, 1 draw, and 3 defeats in the last 5 games in all competitions. They have three big upcoming fixtures against Sevilla, Atletico Madrid, and Borussia Monchengladbach in the coming weeks.

When asked if he was considering resignation after the defeat to Shakhtar Donetsk, he said:

‘No. I’m not going to resign,’ Zidane said via AS. ‘And we’re going to carry on. In the first half, we played well. It would have been a different game if we’d got the first goal. Their goal did us a lot of damage, because we were playing well. We had two or three chances, and hit the post. It didn’t want to go in.

“He ran, he drove, he struck and he has struck gold!”Shakhtar’s Manor Solomon finds the bottom corner emphatically to put Real Madrid out of the qualifying places going into Group B’s final match

‘We’ve had tricky moments and we’re always going to have them. We’re on a bad run of results – there’s no getting away from that. But we have to keep on going.

READ: Lampard is confident that Odoi will have a big future at Chelsea

‘This was a cup final, we prepared for it very well, and put in a good first-half display. We know that we have another game to go that we have to win. There are always tricky moments at this club.

‘It’s a tough moment, but we have to show the character and the pride that we have. It’s a shame. We’re going to have to win our next game because today it wasn’t to be. We’re going to keep the faith and carry on fighting.’