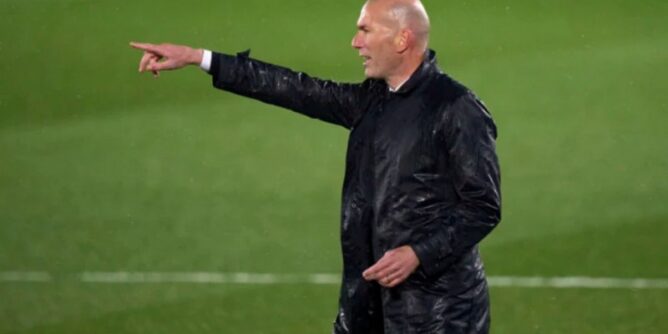 Real Madrid boss Zinedine Zidane has advised his side not to be distracted by the prospect of facing Chelsea in the UCL semis while their fate in the La Liga is not yet known.

The Los Blancos have had a brilliant week after progressing to the semifinals of the 2020/21 UEFA Champions League after seeing off Liverpool.

The La Liga giants visited Anfield with a 3:1 advantage and weathered the early storm by a spirited Liverpool side in a game that eventually ended goallessly.

Their next opponent in the competition is Chelsea but Zidane is focused on the three crucial league games that precede the first leg of the UCL tie against Chelsea at home. Therefore, the Frenchman has insisted that his side cannot afford to be distracted.

‘We’ve got a number of LaLiga games to play before we face Chelsea, but it’s going to be a very tough tie,’ said Zidane.

It can be recalled that Real Madrid beat Barcelona 2:1 last Saturday and a now 1 point behind league leaders Atletico Madrid.

Zidane has been heavily criticized in what has been a tough season and was reportedly on the brink of losing his job earlier in the campaign. This was because his side were lagging behind in La Liga and started their UCL campaign on a low and at a time were staring at an embarrassing group-stage exit.

However, the Frenchman restrategized and has seen his side bounce back on all fronts this term. Regardless, he remained diplomatic when asked if he had any message for his critics and detractors after progressing past Liverpool.

He added: ‘I’m not going to say anything. We’re alive in both competitions, but we haven’t won anything yet. We’ve had tough moments during the season, of course. But we’re still alive. We just have to carry on in this vein.

‘We’ve finished this game in much better physical shape than against Barcelona. This week we’ve had to put a tremendous shift in and we come away from these three games feeling very happy.

‘(I am proud of) the character they have. They are a team who always want more. The more the going gets tough, the more they stick together. We’ve got bags of quality in this side, of course; but the character these players show is the most important thing.’