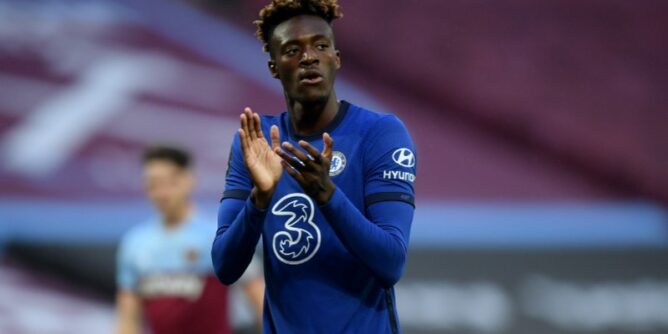 Reports suggest that Tammy Abraham may be looking to leave Chelsea in the summer after seemingly falling out of favor under Thomas Tuchel and Wolves have emerged as one of the Premier League clubs who are interested in signing the forward.

The German has preferred the likes of Timo Werner, Olivier Giroud, and even Kai Havertz to lead the line at Chelsea. Abraham has fallen further down the pecking order at Chelsea in recent times.

It won’t be bad for Wolves to strengthen in their forward areas after what has been a disappointing season for Nuno Espirito Santo’s men who impressed last season.

Therefore, a report from Football Insider suggests that Wolves are interested in the forward. Despite Abraham’s lack of playing time at Chelsea, his talent and contributions to the side already speak volumes and he will likely blossom in another Premier League club

The 23-year-old striker has 30 goals in 81 games for Chelsea in all competitions and blossomed initially during loan spells to Bristol City and Aston Villa.

The report adds that Wolves have previously made moves to sign Abraham and their chances of succeeding if they make another move for the forward this summer is better than before.

Regardless, they will surely face competition from other Premier League clubs who have also identified the England forward as one of their transfer targets in the summer.

Meanwhile, the season has not yet ended and Abraham could yet be given a chance to endear himself and his qualities to Thomas Tuchel as the Blues continue their fight in the UEFA Champions League, an FA Cup triumph, and a place in the top four.