What is Netball? – Full Guide 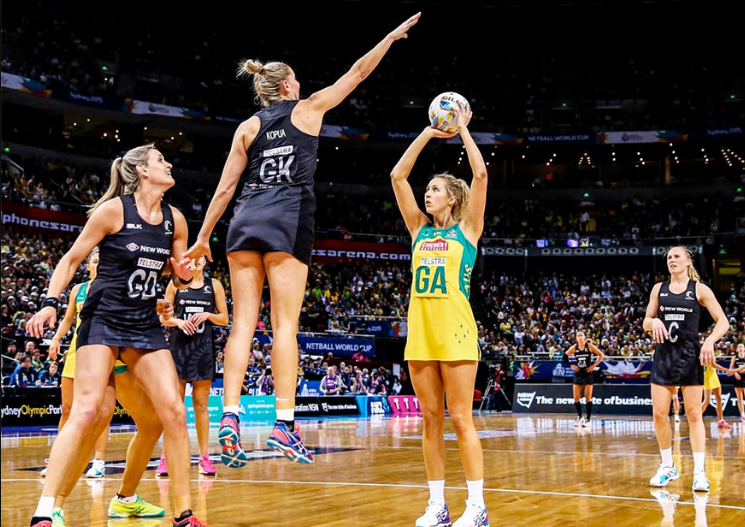 Many sports abound and although some are not as popular as the likes of soccer, football, and basketball, they’ve started attaining the popularity they’ve been craving.

Netball is one of these sports that is becoming popular and it is a game that requires agility, a lot of speed, agility, and skill. The object of the game, which is played by two teams of seven players each, is to either maintain or get possession of the ball.

As expected, the winner in a game of netball is the team that scores the highest number of goals. Although it began as a sport that was mostly played by women and girls, both boys are today participating in netball.

Also, Netball is similar to basketball and is a team sport with no dribbling or backboards. To move the ball up the court, players pass it to their teammates. When the ball reaches the last third of the court, players attempt to shoot it into the goal.

READ: What Is A Double Switch In Baseball?

This game does not allow for tight defense, so players cannot steal the ball. Meanwhile, defenders must allow at least three feet of space to players in possession of the ball.

After the rise in the popularity of basketball among men, ladies decided to start their sport and called it netball. In the year 1895, netball was first played at Madame Ostenburg’s College in England.

In the year 1985, the International Olympic Committee officially acknowledged netball as a sport. The regulatory authority for netball was founded in the year 2012.

However, there have been changes to the name of the sport’s governing body over the years, and it is now known as The International Netball Federation.

Netball can be played on a variety of indoor and outdoor surfaces. Tarmac, rubber, and hardwood courts are the most commonly used playing surfaces.

A tarmac netball court is hard and has the feel of an asphalt road. Netball necessitates a tarmac floor that is both all-weather and slip-resistant.

Rubber surfaces are common for indoor and outdoor netball games. It is softer than tarmac, providing athletes with more cushion and reducing stress on the knees. The hardwood floor is a surface that is only used inside. Indoor netball competitions take place on these floors.

Netball equipment is fairly simple, with little required for gameplay. Proper goal posts with nets are required as well as the balls that are used for the sport.

If you want to play netball, it is ideal to choose a suitable playing surface, such as the ones listed above, with proper game lines.

Comfortable athletic clothing, such as a bib or jersey, and shoes with adequate ankle support should be worn.

However, it should be known that low sneakers are not recommended for netball because they increase the risk of twisting an ankle.

READ: How Many Innings Are In A Softball Game? – Full Guide

The goal of teams in a netball game is to score more goals than the opposing team. A netball goal resembles a basketball hoop but lacks a backboard.

A team must pass the ball without dribbling towards their opponent’s goal. Players must be close to the goal to shoot and score because there is no backboard.

The game lasts for 60 minutes which consists of four fifteen-minute quarters. Meanwhile, only certain players are permitted to shoot the ball and this depends on their position.

Rules And Regulations Of Netball

Netball follows the same rules as basketball. Players must pass the ball to move it up the court. Netball does not allow dribbling.

Once a player has possession, they can only take one step. They must always keep one foot planted when in possession of the ball; otherwise, a turnover will occur.

When a player has the ball, they have three seconds before passing it to another teammate. Netball has specific defensive rules. Defenders must keep three feet away from the player with the ball at any time.

Although netball does not permit contact, it can become physical at times. Inappropriate contact will result in a penalty for the team that has possession of the ball.

The netball court is divided into three sections, and players must remain in those sections based on their positions. Only two of each team’s seven players are permitted to shoot the ball.

READ: How Long Is A Lacrosse Game? – Full Guide

These positions are known as goal shooter and goal attack. Also, the ball cannot be thrown across the entire court but must be moved through all three sections and touched by at least one player in each.

Teamwork is the most important strategy in netball and it comes as no surprise. Teamwork is an essential component of any team sport and cannot be overemphasized.

It is very vital in netball because players cannot move with the ball, the only way to move forward is to pass the ball to a teammate.

Another strategy is to keep an eye on the game and ensure that you are in the proper position on the court. This allows players to create spaces and position themselves in open areas to receive a pass from a teammate. Therefore, awareness is a must in netball.

READ: What is MVR in Baseball?

Players who hail from Europe, Australia, and New Zealand consistently rank among the sport’s elite. Since women make up the vast majority of netball players, the largest leagues in the world are those that are exclusively for women.

Gretel Tippett is widely regarded as one of the top players in the world, with a field goal percentage of close to 96 percent.

Another netball superstar is Caitlin Bassett, who leads the Australian national netball team as captain. She has an impressive collection of gold medals thanks to her success as a netball player.

Listed below are some of the most well-known players in netball:

There are three major netball leagues in the world and they can be found in countries where the sport is very popular.

In the United Kingdom, they are known as the Netball Superleague, in Australia as the Suncorp Super Netball League, and in New Zealand as the ANZ Premiership Netball League.

READ: What is Cherry Picking in Basketball? – Full Guide

The UK league has the most teams, with 11, while the Australian league has eight and the New Zealand league has six. The Netball Superleague is the oldest league, having been established in 2005.

There are a great number of other competitions at the national level. Netball is also available at the Commonwealth Games.

There is also a World Cup for Junior Players and the World University Netball Championships. The following are some of the most well-known tournaments for netball:

The Netball World Cup: It is the most important competition in the sport of netball, as it brings together the top teams from all over the world in a single venue.

READ: What Does -1 Mean On A Soccer Bet? Full Guide

Summary – What is Netball?

From this article, it is obvious that Netball is still a growing sport considering that it has attained massive popularity in just three countries namely, the United Kingdom, Australia, and New Zealand, as mentioned in the article.

Regardless, the game is making giant strides, considering that it is no longer a sport for girls and women. We’ve provided you with some of the best information regarding netball in this article and we hope you leverage it.

How Long Is A Lacrosse Game? – Full Guide

How Many Innings Are In A Softball Game? – Full Guide

How Much Does A Curling Stone Weigh?