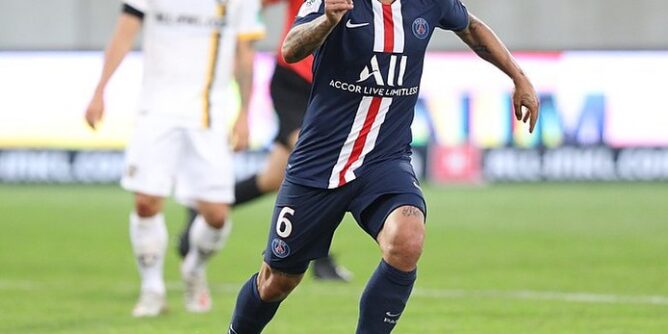 Italy midfielder Marco Verratti believes that the Euro 2020 final clash between Italy and England will be won by the side that properly handles the pressure of a history-making match.

The PSG midfielder has been a mainstay in the team since their group stage win against Wales although there were fears that he could miss the tournament because of a knee injury.

Italy are presently unbeaten in 33 matches, have never lost to the Three Lions at a major tournament, and the 28-year-old has admitted that victory will go to the side that hold their nerve.

“These matches are there to be grabbed – we must win,” Verratti said.

READ: PSG step up their interest in Paul Pogba

“They want to win clearly because they are playing at home and have never won a European Championship so the details will decide things. We must focus on our playing style and put aside everything else. These matches can put you under a lot of pressure and I think that the team that plays with a mind that is free will gain the upper hand.”

Although the Italian midfield faced a stronger foe in Spain in the semifinals, Verratti expressed confidence that his partnership with Chelsea’s Jorginho and Inter Milan’s Nicolo Barela could help them dominate England’s pairing of Declan Rice ad Kalvin Phillips.,

“I think the two matches will be very different,” he said. “Yes, midfield is a key area and we can perhaps make the difference there. We must keep the pace of the game high but we know that they play with two central midfielders who make the team very balanced.

“That allows them to play with almost four forwards, so they are very strong. England have done a great job; they got to the final for the first time and this says a lot. They are a very solid and balanced team. I’m happy we will be playing them in a great stadium – it’s the dream you have as a kid. I think it will be an epic final and history-making either way.”