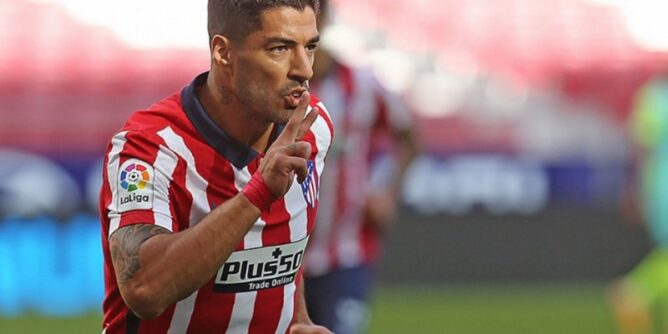 Thomas Tuchel has revealed his admiration for Atletico Madrid striker Luis Suarez and disclosed that he tried to sign him whilst at Paris Saint-Germain before he exited Barcelona for the Rojiblancos in September.

Atletico Madrid coach Diego Simeone also believes that Luis Suarez will be key to his side’s hopes of beating Chelsea and eliminating them from the UCL round-of-16 stage.

Tuchel has managed 7 games as Chelsea boss and is yet to suffer defeat as the Blues remain fifth in the Premier League and are also in the quarter-finals of the FA Cup.

However, he has admitted that the UCL fixture against an in-form Atletico Madrid side is his biggest challenge yet as Chelsea boss as the Spaniards have experience in UCL knockout ties under Simeone.

“It’s clear when you play against Atletico what you get. You get hard fighting and there are many teams who have experienced this.”

Meanwhile, Atletico Madrid have evolved in their style of play this season with the accommodation of attacking talents in Luis Suarez, Joao Felix, and Marcos Llorente.

Luis Suarez is the joint top scorer in La Liga alongside Barcelona’s Lionel Messi. Tuchel then spoke about his interest in the Uruguayan when he was PSG boss.

“There was a possibility,” Tuchel said. “We heard the rumours he was about to leave Barcelona and who cannot be interested to sign one of the best strikers in world football, in history and the present?

“We tried our luck. We did not make it, he chose to stay in Spain with Atletico and again he proves his quality.

“What a mentality! What a player!”

Speaking ahead of the game, Simeone said that Luis Suarez has given his side belief: “For all the competitions, not just the Champions League, his presence gives us experience and leadership,” Simeone said.

“He brings confidence to our team and a lot of tension for our opponents because history shows this is a player who has a gift around the goal.”

Atletico Madrid vs Chelsea will take place in Bucharest due to COVID-19 travel restrictions. Tuchel noted that the away leg at a neutral venue was an advantage to his de with the away goal rule still significant.

“Clearly, yes it is a disadvantage for Atletico to lose their home ground,” Tuchel said. “We don’t have to talk around that.”

“We have to worry about the game, not about things we cannot solve,” Simeone added.

“In the world we live in today, with all the difficulties for everybody, we’re just lucky to be able to play football, wherever that might be.”