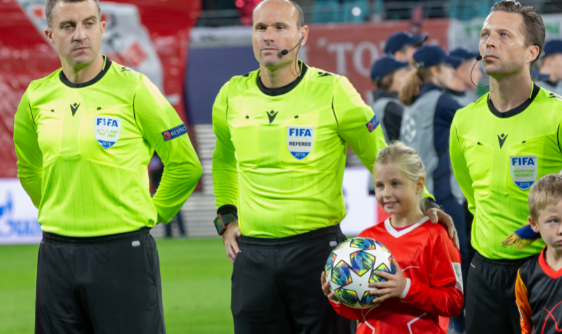 Football just like any other human sport is controversially driven and humans tend to act contrary to the rules of engagement. The referees are designated umpires by the football governing body to control and discipline any defaulters in every football match throughout the world.

The referee’s utmost duty isn’t far-fetched, they’re the people responsible for interpreting, disciplining, and enforcing the laws of the football game whilst in action.

The bulk of match decisions lie on the referee’s final decision. all facts, technical and recently technological decisions with the help of video assistant referee (VAR) connected with play or the game is finalized by the man on the center of the pitch.

He/She is also an official with the authority to start a football match and can also stop play to exert disciplinary action to any erring players on the pitch and emotionally driven gaffers on the sidelines during the game.

If there is an injured player, the referee must halt the flow of the game for such player to get the needed treatment or signal for him to be taken out of the pitch for proper treatment.

Based on the rules of the game, the center referee is assisted by two assistant referees which are popularly known as “linesmen”. They usually move according to the flow of the ball.

READ: THE BEST FOOTBALL STREAMING SITES TO USE

They also advise the referee when the ball leaves the playing area, make a call to the referee with their walkie-talkie when there is an infringement of the football laws during the game that’s out of sight of the central referee.

As we have different football clubs around the globe and competitions/tournaments, the same goes for referees managing the affairs of games. Whenever or wherever an official football game is being played there’ll be a FIFA licensed referee to control the competition.

Antonio Lahoz is a popular Spanish Football referee who has been officiating LA Liga games since 2008. He is a full-fledged international referee with an outstanding reputation and experience in the game.

MATEU is known for his quirky and chatty approach during the game. He currently earns $8000.

READ: Fans Corner – Arteta has all the markings of a winner

Felix is a renowned German football referee. He’s not only known for his unique officiating, but he’s also currently working for SV Am Heart.

He is a well-respected FIFA-listed official referee and he’s also in the UEFA elite category of referees. each match he’s privy to officiate, he earns $10,000.

Apart from his enthusiasm for the sport, Felix is a well-lettered person outside the pitch. He’s one of the top referees out there with a good educational background just like is indicated in his name.

At the 2018 FIFA World Cup in Russia, he was selected for the Mundial. It’s the second FIFA World cup of his career as an umpire of the game at the international scene. He’s regarded as one of the most focused, hardworking center men in European football.

Cüneyt Çakır is a Turkish football referee, well regarded for his unique and unbiased pattern of officiating. He’s been enlisted in FIFA elites referee since 2006 and a cog of the UEFA Elite official referees since 2010.

As a well-grounded man at the center with a low error rate, he earns higher than his peers in the business. The 45-year-old Turk has been a referee for a long time.

Due to his way of referring and his past performance at the center from 2010 to 2020, he was decorated as the second-best referee in the world by the International Federation of Football History and Statistics.

According to records, He has officiated over 250 matches which include 12 Super Lig Derbies, 5 of them being between Fenerbahce and Galatasaray in the Turkish super league.

The 39-year-old Clément Turpin is a French football referee. he has officiated over 360 games. He’s enlisted as a FIFA referee in 2010, and a UEFA Elite group two years later in 2012.

The French Football Federation commended Clément Turpin for his outstanding officiating, as a result of that, he was voted best French referee in 2016.

In 2014 and 2018, he was among the referee at the World Cup Qualifiers also he was frequent in recent matches in the UEFA Europa League. His per season salary is $10,000.

Mark Clattenburg is a popular referee in Europe and is well-known in the United Kingdom. He’s officiated a great number of matches in the English Premier League.

He’s a FIFA Licensed referee and a former member of the Premier League and the Durham County Football Association. He has managed some notable competitions/tournaments which include the 2016 UEFA Champions League Final and the UEFA Euro 2016 final.

READ: THE BEST OVER 1.5 GOALS PREDICTIONS

READ: THE BEST BOTH TEAMS TO SCORE PREDICTIONS

He is undoubtedly one of the most highly rated and valued European referees. As a result of his blossoming career in the European scene, in 2017, he penned an audacious and money-spinning contract with the Saudi Arabia Football Federation and his take-home per season is in the region of $650,000. He’s the highest-paid referee currently.