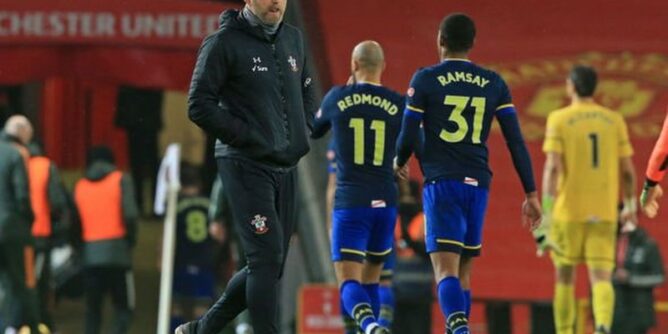 Manchester United were on song on Tuesday night as they thrashed Southampton 9 nil at Old Trafford in the Premier League. The result was an emphatic one as the Red Devils were dominant from start to finish, showing no mercy whilst at it.

However, the club at the receiving end of the heavy defeat, Southampton, have reacted angrily to officials Mike Dean and Lee Mason for the roles they played in the last two defeats, the one to Aston Villa before the trip to Old Trafford.

Southampton have demanded that the pair do not referee their games in the nearest future. According to reports, the Saints have made an extraordinary request after the defeat that saw two of their players sent off, namely Alexandre Jankewitz and Jen Bednarek.

In the game against Aston Villa, the Saints blamed Lee Mason in the 1 nil defeat as they were denied a clear penalty during the game and had a stoppage-time equalizer ruled out by the tightest of offside margins.

Therefore, according to Radio Solent, they’ve demanded that the two referees be banned from their games.

The club have no issues with the red card to Jankewitz for the horror tackle on Scott McTominay but Ralph Hasenhuttl was angered by the dismissal of Bednarek for an accidental foul on Anthony Martial.

The incident was worsened by the fact that Martial told Bednark that he believed it wasn’t a foul as it led to Man United’s 7th goal on the night from the penalty spot. It remains to be seen how this will be sorted out.