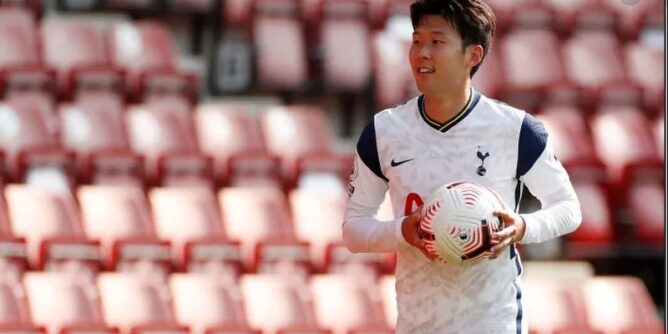 Heung-min Son has revealed that he doesn’t see himself as one of the best players in the Premier League despite his impressive form in recent seasons.

The attacker has started superbly for Jose Mourinho’s side this season with 8 goals in the Premie League and 10 goals in 13 games in all competitions.

Son is one of the most feared forwards in the Premier League due to his ability to find the back of the net, skills on the ball, and his significant turn of pace. However, he claims he hasn’t considered himself on the same level as Kevin de Bruyne, Mohammed Salah, or any other top-flight star.

He disclosed this during an interview on the Korea Football Association (KFA) YouTube channel, Son said: “I’ve never once thought I am among the best players in the Premier League. Honestly, I’ve never thought that for a moment.

The forward is currently with the South Korea national team on international duty as they prepare for friendly games against Mexico and Qatar. He will be looking to replicate his form at the club level at the international stage.

Son went on to talk about his international teammates and his relationship with Harry Kane.

He said: “Kane and I have played together for a long time. It’s common to try to develop [the partnership] at every moment. He is younger than me, but he always plays hard.

“Hee-chan and Ui-jo also work hard. We’ve known each other for a long time, and we know what we want. Hee-chan and Uijo are having a hard time with their [club] teams these days, but I’m lucky with my team.

“I hope Hee-chan and Ui-jo will boost their performance with the national team. I think it’s also my role to help them return to their teams in a better way.”