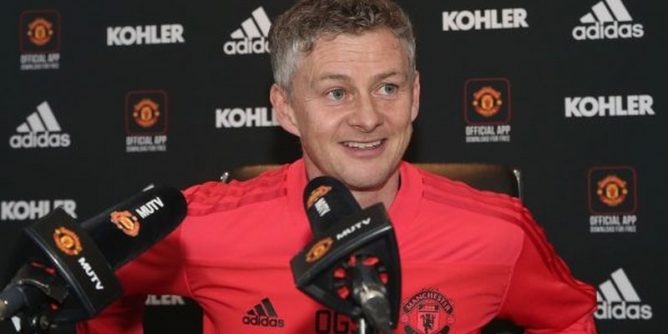 Ole Gunner Solskjaer who is Man United’s new caretaker manager in a press conference on Friday revealed that he would love to take charge as the permanent boss of the club.

Solskjaer who established himself as a Manchester United legend in his playing days replaced Mourinho earlier this week and will manage the Red Devils on an interim basis until the end of the season.

According to the 45-year-old Norwegian, he has not set his heart on being the manager of the club beyond the current campaign but would be interested if he’s offered the job on a permanent basis.

“When you get a job like this and they ask you to sign for six months, you say ‘yeah’,” he said.

“I understand there are so many managers who would love to be manager of Manchester United and I am one of them. But it is not something we’ve talked about, they’ll do a process now for the next six months.”

The Red Devils are currently 19 points behind the league leaders and are also 11 points adrift of the top 4. Therefore, the player popularly known as the baby-faced assassin has his job cut out for him as Man United boss.

“My job is to help the players, make them grasp the opportunity now because they all want to be part of Man United,” said Solskjaer.

“I’m going to be here to help them, help the team, that is down to man management. I had the best manager as a player and coach to learn how he dealt with players and it’s about communication. I’ll sit down and speak to the ones not playing, tell them what I expect of them.

“When you’re at Man United there are a set of demands and one is to be a team player and I don’t think anyone has been on the bench more than me. That’s always my comeback to players, you might come on and make an impact.”

Solskjaer will be on the touchline when Man United face this newly promoted Cardiff this weekend in a reunion for the Norwegian who was Cardiff boss in his first managerial stint in the Premier League.