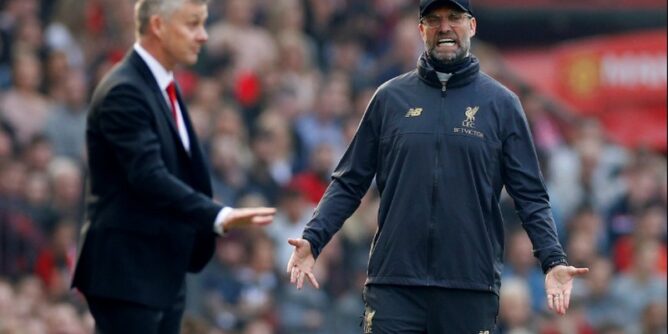 The Premier League title race is heating up and ahead of the crunch top of the table clash between Liverpool and Manchester United, the managers of both clubs have been having a go at each other.

Man United boss Ole Gunnar Solskajer has opined that rival managers who complain about penalties may be using the medium to influence refereeing decisions ahead of upcoming games.

After the 1 nil loss to Southampton at St Marys’ on Monday night, Liverpool boss Jurgen Klopp was surprised that his side were not awarded a penalty and claimed that other teams would have been favored with a penalty call.

Klopp went on to claim that the Red Devils have gotten more penalties than Liverpool in two years than he has had in his entire time at Liverpool.

He made this known in the post-match interview after the loss which gives Man United a chance of going top if they win their game in hand.

READ: Five clubs battle for the signature of Dominik Szoboszlai

“I don’t count how many penalties they have, so if they want to spend time on worrying about when we get fouled in the box, I don’t spend time on that”

Solskjaer went on to point out the penalty they were denied in last season’s FA Cup semi-final defeat to Chelsea after Frank Lampard initially suggested that the Video Assistant Referee (VAR) had worked in favor of Man United during the campaign.

GET THE BEST FREE FOOTBALL PREDICTIONS FOR TODAY

“I can’t talk on behalf of other managers, why they say things like this,” Solskjaer added.

“Obviously I felt it worked last year in the semis in the FA Cup because Frank spoke about it and we had a nailed-on penalty we should have had that we didn’t get.

“So maybe it’s a way of influencing referees. I don’t know, but I don’t worry about that. When they foul our players it’s a penalty. It’s just when it’s inside the box.”

The Red Devils will go on to face Watford in the FA Cup third round on Saturday after playing against the Citizens. They’ll return to Premier League action on January 17 in a cracker against current league leaders Liverpool at Anfield.