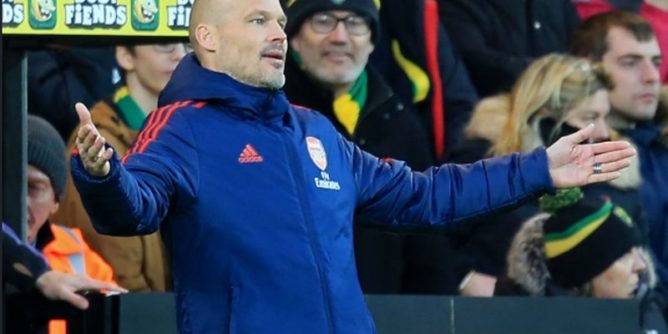 Manchester United legend Paul Scholes has hit out at Arsenal interim head coach Freddie Ljungberg in bizarre fashion for not wearing a suit on the touchline in the Premier League draw against Norwich.

Ljungberg was taking charge of his first Arsenal game but couldn’t prevent the Gunners from succumbing to an eighth consecutive game without a win as they had to come from behind twice to level up for a final 2 all scoreline against the Canaries.

However, it was not the performance that attracted the fury of Paul Scholes but his apparel on the day. The Swede arrived at Carrow Road on a natty grey jumper and shirt combination before sticking a club jacket to help him keep warm during the game.

This didn’t go down well with Scholes whose opinion was that a suit would have been befitting for his new role.

“You would think he’d be out in a suit to show a bit of proudness that he took the job,” Scholes said on PLP.

“To me that’s a great start – shirt and tie to show some discipline.