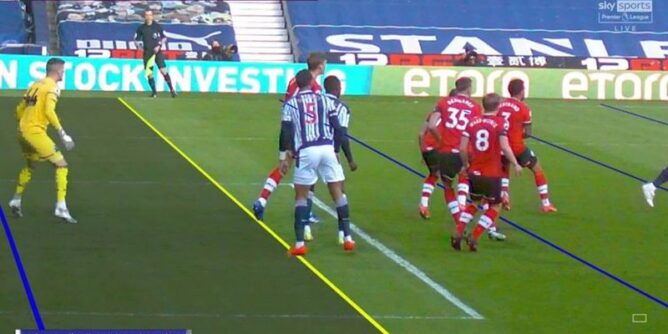 West Brom manager Sam Allardyce has opined that VAR is becoming a laughing stock after another controversial decision was made in his side’s 3 nil win against Southampton at The Hawthorns in the Premier League on Monday night.

Mbaya Diagne’s goal in the fourth minute of the game was chalked off as offside. Kevin Friend, who was the VAR official opted for the on-field decision when the cameras at the Stockley Park couldn’t catch the right angle to help determine if the player’s upper body was on or offside.

This was coming a day after Edinson Cavani’s goal for Manchester United against Tottenham Hotspur was ruled out for a foul against Scott McTominay who brushed off Son Heung-min in the build-up.

However, the Baggies were not affected by the decision at the end as a Matheus Pereira penalty, and goals from Matt Phillips and Callum Robinson ensured that they ran out winners.

Allardyce said: “I’m afraid so (it’s becoming a laughing stock). The reflection on VAR can be done at the end of the season and all parties should have an influential input into how VAR goes forward.

“That needs to be from the PFA, LMA, Premier League and the FA. There are too many of us not being given an opportunity to express how to make it better.”’

West Brom could be looking to start a run as they beat Chelsea 5:2 at Stamford Bridge in their previous game, although they remain second-bottom on the log and are 8 points away from safety with 7 games to go. It was the first time they were recording successive wins in the Premier League this season.

Their next game will be away to Leicester City next Thursday.

“We’ve got it down to eight (points) but games are running out. We don’t have a game this weekend,” said Allardyce.

“Me and Dean Smith (Aston Villa boss) wanted to play the Villa game this weekend but for some bizarre, unearthly, reason it’s not been allowed.

“We have to sit and hope. Instead of us putting pressure on the teams above us we have to wait until the following Thursday when we play Leicester and that’s wrong.”