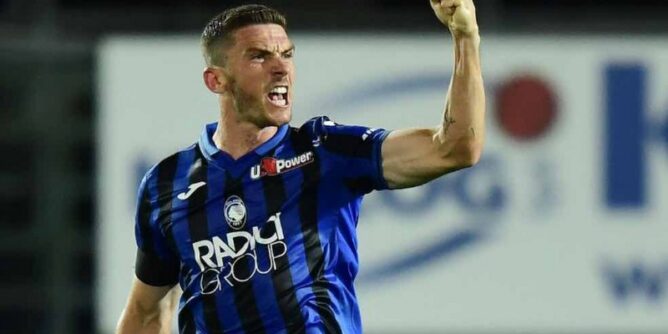 Atalanta will be facing Liverpool at Anfield on Wednesday night after losing the first leg 5 nil to the Premier League champions in Bergamo Italy.

They are expected to get a baptism of fire tonight at Anfield but defender Robin Gosens is hoping to repeat his feat of three years ago by scoring another goal in Merseyside.

In November 2017, the left-back was on the scoresheet as they beat Everton 5:1 in the Europa League at Goodison Park and Gosens is keen to repeat the feat.

“It will be closing the circle if I score another left-footer tomorrow,” he said.

“I’d love to score tomorrow, just like three years ago against Everton. Why not?

“No doubt playing against Liverpool we are playing in one of the best possible games you can play in as a player, here at Anfield in the Champions League.

“We accept we are playing one of the strongest teams but that gives us some motivation.”

Gosens has been impressive in attack from his defensive position for Atalanta and has been likened to Liverpool’s Trent Alexander-Arnold who plays as a right-back for the Reds.

READ: Lampard is confident that Odoi will have a big future at Chelsea

However, Trent is injured and will play no part for Jurgen Klopp’s men at Anfield when they face Atalanta.

“It is a shame he is not playing tomorrow because as a player I always want to test myself against the very best in the world,” added Gosens.

“It is a real shame Alexander-Arnold will not be playing tomorrow. There is no doubt he is one of the strongest wide players in the world.”

Meanwhile, Atalanta coach Gian Piero Gasperini disclosed that his side took some lessons from the 5 nil bashing at the hands of Liverpool in Bergamo three weeks ago. Regardless, he noted that they must avoid the mistakes if they’re to stand a chance at Anfield.

“Compared to that evening we need to be better, commit fewer errors – particularly those ones which led to the first couple of goals as those goals led to a big defeat,” he said.

“We are all well aware how good a team Liverpool are but we have to have belief in ourselves – we won’t be gifting them quite so many opportunities as we gifted to them in the first game.

“Tomorrow that is what we need to get right more than anything else.”