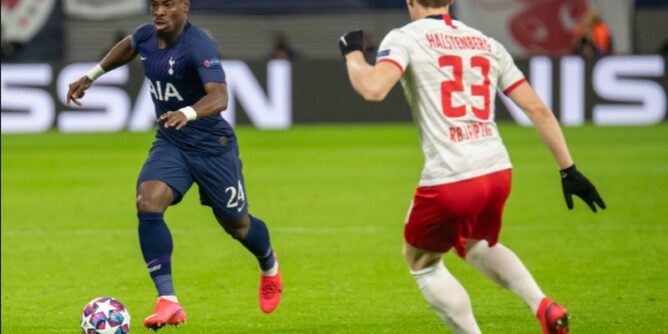 It’s been flying around the web that a released player from Gunner’s archrival Tottenham Hotspur, a defender Serge Aurier, has been linked to the Emirates after his services were deemed surplus to requirements by Tottenham.

There are indications that the player could be snapped up after the closure of the summer transfer window. However, the issue is that such a player must not be tied to any preceding contracts or club. Therefore, a free agent from Spurs could be joining Arsenal.

Serge Aurier is now a free agent after the transfer deadline day after a mutual agreement was reached between him and Tottenham to get his contract terminated. The conclusion of his exit was finalized due to an absence of suitable offers for the 28-year-old, who had less than a year to run on his existing contract with Tottenham Hotspur.

Arteta, who has been under intense scrutiny and pressure has given his consent for the Gunners to start a conversation with the Ivorian right-back who was linked with the Gunners before he signed for their bitter rivals in 2017.

The question on the lips of Arsenal fans and pundits now is; Is it good or bad news for Arsenal? Undoubtedly, the Ivorian international is talented and he’s also an experienced player on the pitch. However, would it be easy for him to fit in quickly and adapt to changes, or would it be a bad idea for him to be given the spot in the team quickly?

We all know that if Serge Aurier joins Arsenal, he would surely not be the first player in history to cross the divide. In time past, there was William Gallas who moved to Spurs from Arsenal on a free transfer in 2010.

Aside from that, the most regarded and what most people say is the most controversial transfer in British Football History was Sol Campbell’s move from Tottenham Hotspur to North London, Arsenal.

Till today, Sol is still on their radar and the abuse hasn’t subsided. The topic of abuse within the football world is more prevalent in recent times. Therefore, Aurier should be expectant of such being dished out to him if he later joins their rivals Arsenal.

Evidently, Serge is not an outstanding and earth-shattering move like Campbell for obvious reasons, but it would certainly erupt and stir controversies between the two clubs.

With the deteriorating Arsenal side having already conceded 9 goals this season – in three (3) Premier League games, there is no doubt or any iota of question that they need more legs to strengthen their leaking defensive lines.

The question now is; Is Aurier the right man for the job? Before the closure of the transfer window, Takehiro Tomiyasu was snapped up by Arsenal for a deal worth €23m from Bologna.

Therefore, if Aurier is signed, this could bring selection headaches to the rookie~Arteta because both players play the same position.

Regardless, we cannot jettison the experience of the 28-year-old former PSG player. He’s been playing the game for over ten years at the highest level. He started his football journey with Lens, he spent three seasons there with 40 game appearances before he moved to Toulouse where he featured 72 times for them with 8 goals to his name.

In July 2014, he was loaned to Paris Saint-Germain with an option to buy. After his loan stint, he was secured permanently. After two years at PSG with 43 appearances, he left for Spurs in 2017 for a fee reported to be in the region of £23m.

Having spent 3 years with Spurs, his services were no more required or needed by new boss Nuno Espirito Santo. He had to reroute his career trajectory. Meanwhile, the question of Arsenal being his next destination still remains unclear.