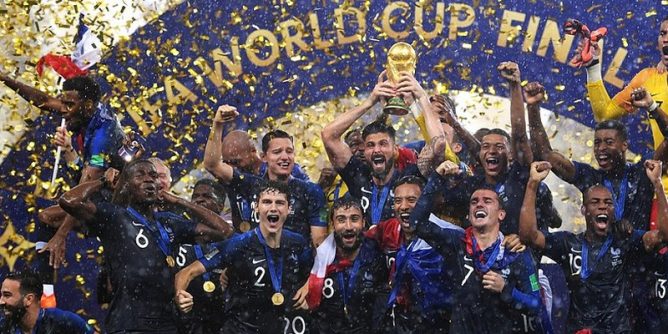 The 2022 FIFA World Cup is fast approaching and less than a year away from its commencement. Qatar, which was given the hosting right has been rigorously planning for the glamorous event that usually takes place every four years.

Qatar would be the second ASIAN country to host the Mundial, the first was co-hosted by Korea and Japan in 2002 which was won by Brazil.

The FIFA World Cup is the mother of every football tournament and it’s imperative to launch play the event in befitting pitches/stadiums. Qatar as a host has unveiled seven of the eight planned venues for the global showpiece tournament.

These are the seven stadia officially announced ready for the World Cup next year in Qatar.

Khalifa International Stadium was opened in 1976 in Doha, Qatar, and the pitch has a capacity of 45,416. This international stadium has hosted barrages of top international events and tournaments like the Asian Games, the Gulf Cup, and the Asia Cup.

READ: The top five highest-paid football referees in the world

The stadium was renovated to the highest standard in 2017 for the upcoming World Cup slated to be hosted in the country and it’s one of the stadia planned for the event. It’s without a doubt one of the most iconic international stadiums in Asia.

Al-Janoub is a 40,000-seater stadium, it’s located in Al-Wakrah, Qatar. It was officially launched in 2019 before the Amir Cup final when Al Sadd lost 4 goals to 1 to the eventual title winner Al Duhail.

The stadium was designed by Zaha Hadid, a British-Iraqi architect whose inspiration was drawn from the sails of traditional Dhow boats which were being used by pearl divers from the region.

The exterior and fascinating curvilinear roof was likened to Wakrah’s history of seafaring, Bowed beams that hold up the roof symbolize a ship hull. The stadium gives the native fans the feeling of being on a ship.

This stadium two years ago, precisely in May 2019, received a five-star GSAS (Global Sustainability Assessment System) rating. The 40,000 capacity stadium is located in Al Rayyan city in Qatar.

The facility is among the most environmentally sustainable stadiums in the world. The 40,000-seater Education City Stadium was equipped with modern digital facilities. It’s a ground declared ready for the World Cup come next year.

The stadium is the home ground of Qatar Stars League giants Al Rayyan. The 40,000 capacity arena is located in Al Rayyan city in Qatar.

It was built in 2003. In 2016, the renovation of the coliseum was officially established for the upcoming World Cup slated for 2022. After the conclusion of the renovation, it was launched and declared ready for the big occasion on Qatar’s National Day.

THE BEST FOOTBALL STREAMING SITES TO USE

The stadium was designed by the son of the soil, a Qatari architect Ibrahim M Jaidah. No wonder the edifice of the Al Thumama arena resembles the ‘gahfiya’ – the traditional head cap commonly worn by men and boys in the Arab world.

The Al Thumama Stadium was officially declared ready for the World Cup after the Amir Cup final between Al Sadd and Al Rayyan which was won by Al Sadd on penalties shoot out.

According to fact-finders, The stadium was accessed and accredited to host games up to the quarter-final stage of the 2022 World Cup. The arena is one of the well-equipped facilities in Qatar.

The amusing part of this stadium is that, it was built from the materials of shipping containers and according to reports, it’s the first demountable stadium in the history of the FIFA World Cup.

On November 20, 2021, Stadium 974 was officially launched and on November 30, 2021, FIFA Arab Cup was the stadium’s first opening game. Base on how it was built, Stadium 974 ventilation is easier and can be naturally sustained, unlike others that were built with Advanced Cooling Technology.

THE BEST FOOTBALL PREDICTION SITE TO USE

The 40,000 capacity is projected to host about 7 matches during the Mundial. Reports indicate that the facility would be dismantled after the end of the 2022 World Cup.

The magnificent 60,000-seater stadium is one of the largest football venues in Arab sports springs. It was launched when Qatar hosted Bahrain in rebranded Arab Cup opening fixture.

Al Bayt arena is one of the stadia that would host most of the 2022 World Cup come next year. Base on grapevines, about nine World Cup games, would be played in that arena. The ground is an important sporting facility in Qatar.