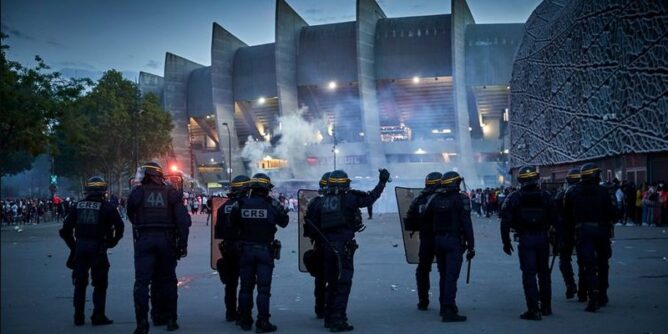 Paris-Saint Germain fans were hoping for their first-ever UEFA Champions League triumph last Sunday but this was not the case as Bayern Munich beat them 1 nil in cagey encounter through a goal by Kingsley Coman.

Reports suggest that police were attacked, shops vandalized and several folks arrested after the loss to Bayern Munich. The defeat was bitter for some to take.

These were the thoughts of Interior Minister Gerald Darmanin on Twitter: “The savagery of certain delinquents from last night: 16 members of the police forces injured, 12 shops attacked, around 15 cars vandalized”

The Paris police department have also revealed that 158 people have been arrested in connection with the incident on suspected theft and vandalism. It was also disclosed that much of the trouble took place around the Champs Elysees avenue where fans gathered to watch the game.

The fracas started off before the game as there were clashes between PSG fans and the police before kickoff on Sunday. Some supporters hurled projectiles at police vehicles just outside the Parc des Princes Stadium.

The police had to intervene by dispersing them with tear gas. All in all, Thomas Tuchel and his men came very close this time and will wait to take their chances next season.