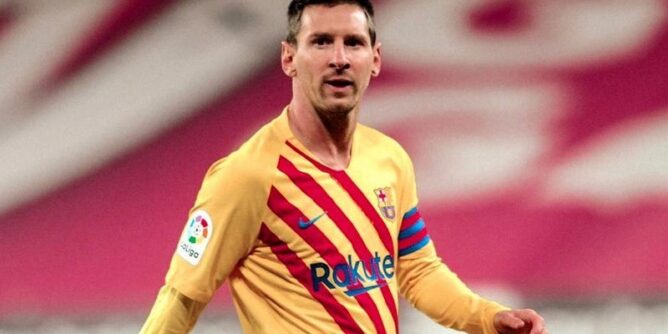 Barcelona boss Ronald Koeman has described Lionel Messi as the most important man in the history of the club.

This was after the Argentine joined Xavi Hernandez at the top of the club’s all-time list of appearance makers. This was actualized in the 4:1 thrashing of Huesca in the La Liga on Monday night.

Messi made his 767th appearance for Barcelona on the night and scored two goals. Barca have closed some gap between them and Atletico Madrid after the latter drew 0:0 with Getafe last weekend.

Barca have been impressive in recent weeks after a slow start to the season with Lionel Messi pulling the strings as expected. Therefore, Ronald Koeman had no choice but to lavish praises on the Argentine superstar.

“I think Messi has shown that he is the best,” Koeman said. “The first goal was fantastic. He deserves to be important for this team.

“I don’t know what else to say about Leo. The level he has been at for so many years, so many games.

“He has equalled Xavi and in principle he will surpass him on Sunday.

“He is the most important man in the history of this club. Luckily he is still with us.”

His two goals on the night also ensured he went past 20 goals for the season and this has now been done for 13 consecutive seasons, establishing him as the only player to do so in La Liga.

The victory will pile more pressure on leaders Atletico Madrid who appear to have lost steam in the race for the title. With 11 games to go, there is still a lot to play for, and just 4 points separate them presently.

“The points we lost for a few weeks … we have reacted well,” the Dutch coach said. “The team is confident. We are in good shape and we are fighting.

“We cannot lose more points because we have already lost quite a few.

“I’ve always said there is a lot to play for. It’s always hard for any team to hold out.”