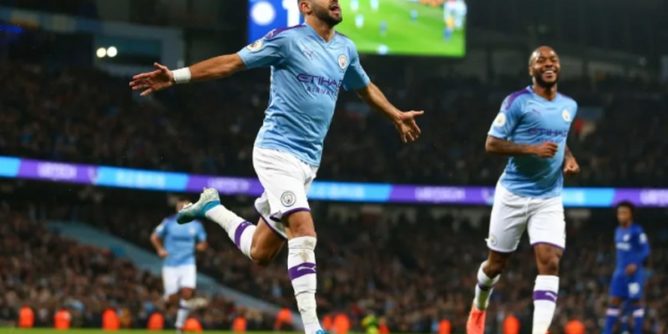 Manchester City winger Riyad Mahrez believes that the Citizens can beat Liverpool to the Premier League title despite trailing the Reds by 9 points. The 28-year-old Algeria international was on the scoresheet in his side’s 2:1 win against Chelsea at the Etihad last Saturday.

Liverpool beat Crystal Palace 2:1 at Selhurst Park before the game against Chelsea while Leicester won away at Brighton. He pointed out last season’s performance which enabled them to leapfrog Liverpool and hopes that they can repeat a similar feat this season.

“We knew they had won, but we are built to win every game. If they win or lose, we try to win. It’s our mentality. We have to win anyway,” Mahrez told the Mirror.

“We don’t look too much at Liverpool. At some points last season they were ten points ahead of us, and we kept going [until we won the title].

“We have to try to win every game, like we used to, and see how many points we have at the end.”

Mahrez has scored 4 goals and provided 8 assists for Pep Guardiola’s men in 15 games in all competitions this term. Manchester City will now turn their attention to the UEFA Champions League where they’ll welcome Shakhtar Donetsk to the Etihad on Tuesday.