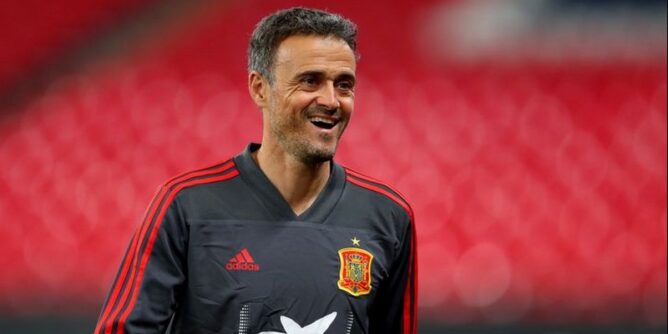 Spain coach Luis Enrique is expected to stay true to his philosophy as he attempts to transform the La Roja into world-beaters yet again. They will face Germany on Tuesday evening after a run of average results.

Spain drew 1 all with Switzerland in a game where captain Sergio Ramos missed two penalties. The results that preceded the draw were a 1 all draw with the Netherlands and a 1 nil loss to Ukraine.

Spain were impressive in the reverse fixture against Ukraine which they won 4 nil. However, since then, they’ve scored just 3 goals in 5 games and have been leapfrogged by Germany to the top of their Nations League group.

Regardless of the poor run of form, which folks have not been accustomed to in recent times, MARCA have claimed that Luis Enrique is still keeping cool and calm.

READ: Son not seeing himself as one of the best in the Premier League

“The coach was happy after the match in Basel,” wrote Miguel Angel Lara. “He said it in the press room and it wasn’t a pose. He wants his teams to play like this – high pressure, intensity, camped in the opposition half.

“He’s not going to change because he believes it’s the best way to win, and we’ll see the same against Germany. Each game is a step toward the main objective – not the Final Four of the Nations League, but the European Championship next summer. Enrique wants to reach that moment with a polished idea.”

Spain possess the ball more than their opponents in games and there are stats that prove this. Against Switzerland, they had 66% possession, completed 88% of 748 passes, recovered 37 balls, thanks to their high-intensity style of play, and created 20 chances.

Meanwhile, the coach and the squad still have complete faith in Sergio Ramos despite the penalty misses as his experience has come in handy in helping out some of the recent debutants in the side.