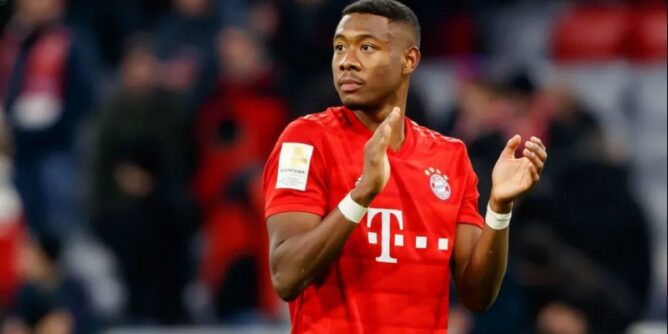 David Alaba is one of the most sought after players in recent times as he enters the last six months of his contract with Bundesliga giants Bayern Munich.

As his current contract nears expiration, the Austrian is free to negotiate with any of the top-flight clubs outside Germany and join them in the summer.

The 28-year-old is not interested in extending his contract at the Allianz Arena and has made it clear as he seeks a new opportunity elsewhere.

The player is reportedly attracting interest from six top European clubs and Liverpool are the latest to be involved after holding talks with his agent Pini Zahavi.

Italian transfer expert Fabrizio Romano has disclosed that the Reds want to bring David Alaba to the Premie League in the summer. However, they must fight off stiff competition in their bid to acquire the versatile player.

La Liga giants Real Madrid are also interested in the Austrian and have reportedly offered him a long-term contract. According to Roma, Los Blancos are favorites to land Alaba with a four to a five-year deal being offered.

“Liverpool would also like to sign Alaba next summer and [is] pushing hard to make it happen. They too have made contact with the player’s representatives, but it has long been his dream to play for Real Madrid and they are in pole position,” Romano wrote in his column for the Guardian.

Romano further revealed that Alaba intends to honor his contract with Bayern Munich till the end of the 2020/21 season although interested clubs have the option to pay the fee for his release this January.

Meanwhile, a report by Marca suggests that Barcelona who were interested in bringing the Austrian to Camp Nou have thrown in the towel with regards to his acquisition and will now shift focus to other available reinforcements that will be available in the market.

The question of Alaba’s destination after his departure from Bayern Munich will surely be one that will fuel speculations and rumors until he puts pen to paper for a new club and adventure outside Germany.