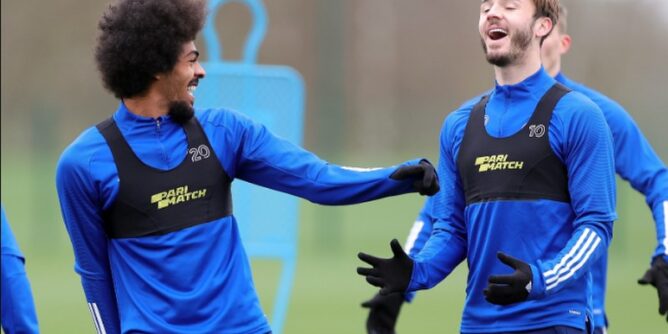 The trio of James Maddison, Ayoze Perez, and Hamza Choudhury will return to training with the Leicester City first team for the first time on Wednesday after breaching coronavirus protocols.

The three players were forced to train alone for the whole of last week and were also dropped from the squad ahead of Sunday’s Premier League defeat to West Ham after they attended a party at Ayoze Perez’ house after the defeat to Manchester City.

The likes of club captain Wes Morgan and injured Harvey Barnes were also punished for being at the party. Foxes boss Brendan Rodgers, speaking shortly after the West Ham loss said:

“From a personal perspective I was bitterly disappointed. But it’s a mistake that they’ve made and I won’t hold it against them. It’s in the past now.

“The boys will join the group and then we will get ready for a semi-final.”

It is believed that the manager and the club hierarchy are convinced that sufficient punishment has been handed out to the players involved, hence their reintegration into the squad. The club also decided not to fine any of the players and Rodgers feels that matter is closed.

Meanwhile, former Leicester striker Emile Heskey thinks that Maddison’s action will not have endeared him to Three Lions boss Gareth Southgate ahead of the European Championship in the summer.

Heskey said: “I don’t think it will sit well with the management of England. Gareth (Southgate) will be looking at that with all players at the way they conduct themselves on and off the field.

“Maddison’s a phenomenal player who has plenty of time on his hands to get things right.”

The Foxes are losing ground in the race for the top 4 although they still sit third on the log. They’ll now focus on Sunday’s FA Cup semifinal game against Southampton as they attempt to qualify to the final of the competition for the first time since 1969.