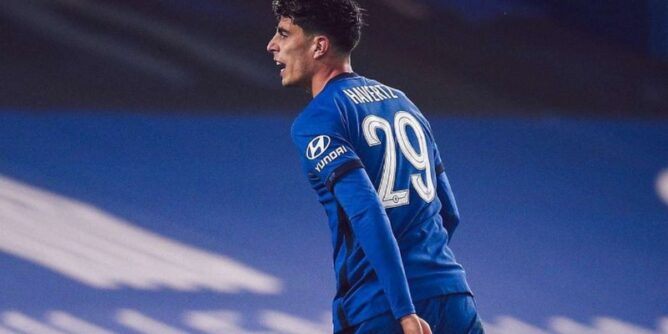 Frank Leboeuf has insisted that Kai Havertz needs to be offering more to the Chelsea cause, noting that the £70 million ($90m) playmaker disappears often when the Blues need him most.

Chelsea shelled out a significant transfer fee for the German playmaker and his addition to the Frank Lampard led side was quite a coup considering the interest from other clubs.

He has shown flashes of his ability in the Carabao Cup with a hat-trick but it seems his adjustment period to life at Stamford Bridge is taking longer than expected. The youngster has struggled for consistency in the Premier League with his constant drifting in and drifting out of games.

Leboeuf has called on Havertz to raise his game and pointed out Ziyech’s contribution in recent games.

“I’m very pleased for Ziyech, getting fit and giving his best. But I’m still not convinced about Havertz, I still want more from him.

“I want more impact from him where I think he disappears. I’m sure Frank is still not completely happy with the way they worked together.

“Sometimes it seemed like they were looking for each other like they don’t really know each other.

“I’m looking for something better, much better from Chelsea. With the players they have, they’re capable of giving much more than we saw.

“Even though they got the win, the clean sheet, everything was going their way, but I can’t be happy with the performance 100 per cent.”

Chelsea gained all three points at Turf Moor and are now in the top 6 as they look for that spark that will help them mount a challenge for the title.

Their next game is in the UEFA Champions League against Ligue 1 outfit Rennes on Wednesday before they return to the Premier League to face Sheffield United.