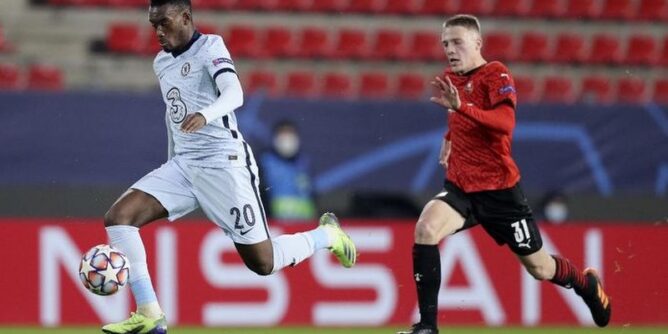 Chelsea boss Frank Lampard expects Callum Hudson-Odoi to have a big future at Chelsea after scoring his third goal of the season in the UEFA Champions League 2:1 win against Ligue 1 outfit Rennes on Tuesday night.

The Blues garnered all three points on the night, thanks to a header by substitute Olivier Giroud in the closing stages of the game after Rennes had equalized.

Odoi was very impressive on the night and has now equaled the number of goals he scored in 33 games last season.

Competition for places at Chelsea has been tough this season with the likes of Christian Pulisic, Timo Werner, Kai Havertz, Mason Mount, and Hakim Ziyech, all suitable to play on the wings or in the number 10 role.

Regardless, Frank Lampard expressed confidence that the academy graduate who is keen to improve his game will have a successful career at Stamford Bridge. After the game, with Chelsea securing a place in the last 16, the English manager in an interview with BT Sport said:

“Bringing him into the team today I knew he’d had a couple of good performances with the England under-21s last week.

“I know he wants more minutes, so do other players in the team. Christian Pulisic is back fit at the weekend so I have competition in that area.

“It’s not as cut and dry as Callum not getting minutes in a period it means that he’s out of favour with me. It certainly isn’t.

“He is still a developing player to a degree. The bit of quality he shows with the first two touches before he gets a shot away is top class, I know he can do that.

“He came off the back of a really bad injury not that long ago as a young player.

“There are loads of great things about Callum and there are things he can improve in his game and he knows that.

“He’s a big player for Chelsea and has a big future with us. I’m delighted for him, his all-round game today on and off the ball was fantastic and he gets his goal.”

Meanwhile, Callum Hudson-Odoi said himself: “Everybody is playing well at the moment but we want to keep improving.

READ: The best over 1.5 goals tips and predictions for today

“I need to take each opportunity I get when I’m in the team. I want to keep getting goals and assists and working hard for the team. I’m happy with the three points.”

“I know Mason [Mount], he works really hard and presses really well in the middle of the pitch so as soon as he got the ball I knew to take off, I was in front of the full-back.

“His [Mount’s] vision is amazing and he picked me out so I got in there and got the goal.”

Ahead of the weekend’s Premier League game against Tottenham, the winger said: “We go into it trying to win the game, we’re all confident and playing really well at the moment.

“We’ll go there confident and hopefully get the three points there as well.

“We’ve got to make sure we recover well, get everybody ready for the game on Sunday and hopefully get the win there.”

He may not start against Tottenham Hotspur but will be hoping for some minutes from the bench as Chelsea host their red hot London neighbors. The game will see a now-familiar foe in Jose Mourinho at Stamford Bridge as Chelsea seek to make it to the top of the Premier League table.