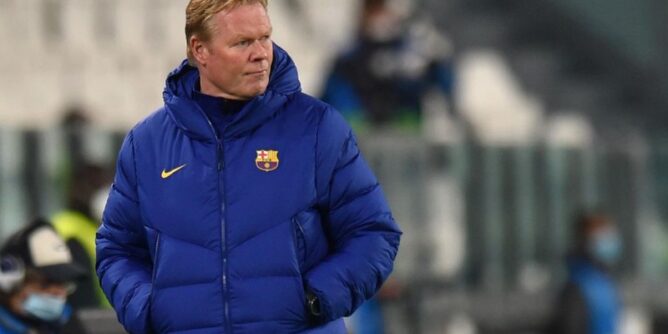 Koeman’s dismissal was a ticking timed bomb, every football follower and observer already saw it coming due to the series of bad results they’ve been churning out in this campaign, It wasn’t a surprise that he was axed, it was expected.

Some football analysts already diagnosed the situation before his retrenchment. After months of intense speculation regarding his future as Barcelona head coach, the defeat to Real Madrid on Sunday’s Clasico followed by the loss away at Rayo on Wednesday proved to be the final straw.

The Dutch manager Ronald Koeman has been forced to walk the plank as head coach of Barcelona after 425 days at the helm of affairs at Camp Nou.

Under his wing, Barcelona have been piss poor and retrogressed. During this time frame, they have managed to garner just 15 points from 10 La Liga games without forgetting their lackluster routing to Bayern Munich at home and away to Benfica which all ended in three goals deficit without a reply.

The only 3 points they have in UCL group E was their hard-fought victory against Dynamo Kyiv at camp Nou that ended with a solitary goal scored by Gerald Pique.

The capricious situations from last season at the club left people to wonder with their thoughts and imagine if there was any possibility of Koeman turning the precarious situations around but the Dutch gaffer couldn’t wrestle it off.

The Catalonia powerhouses are 9th on the La Liga table after their third loss against the red sashes this season, they’re six points adrift of the joint leaders with a game in hand.

The last time Barcelona were in this dilemma was in the 1987-88 season, they later finished 6th on the log after the season. This could have been the situation if the Dutch tactician wasn’t relieved from the fragile job of Barcelona.

Now, it’s a tale of who’s coming next to make the team attain the status they’re known for over the years.

The La Liga giants will now shuffle for a capable head to replace the departed Dutchman as soon as possible, with club legend Xavi Hernandez being taunted for the hot seat, currently at Al Sadd in Qatar.

He’s considered the favorite to take over. In the meantime, Sergi Barguan was appointed to take charge of the Barcelona job for the time being. The club confirmed the appointment of former Spanish left-back as interim head coach on Wednesday following the dismissal of Koeman.

The reports from Spain about the coach taking charge a still not concluded, Talks are in an advanced stage with former midfield talisman Xavi Hernandez to be Koeman’s successor permanently, but this could be a hard nut to crack as his release from his employers at Al-Sadd is unlikely to be immediate.

Xavi was among the list of gaffers enlisted by Laporte to take charge a few weeks ago but the financial situation in the club elongated their rough patches.

With Sergi Barjuan, who’s currently the coach of Barça B, being upgraded to take charge of the technical management of the first squad, the team chemistry is expected to change from what they had under the forgone manager.

However, his temporary job position as first-team gaffer shall end the moment the club hires a full-time head coach to replace the dismissed Ronald Koeman.

In 2008, when the club was experiencing turbulence during the time of Frank Rijkaard, the club took a gamble on inexperienced Pep Guardiola. The situation subsided and the Spaniard forged a conglomerate of system players out of nothing, they later became the best team in the recent era.

Xavi’s Al Sadd coaching career has been enticing, he hasn’t lost a game in three years since he took charge of the Qatari side. The question of if he is the messiah that Barcelona are waiting for would remain unanswered till he takes over the job.