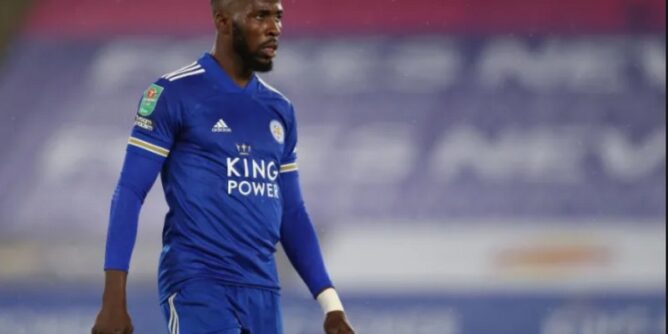 Leicester City made more progress in their quest to make it to the 2021/22 UEFA Champions League with a 3 nil Premier League win against a recently resurgent West Brom and Kelechi Iheanacho was on hand to score one of the goals in the game.

The 24-year-old Nigeria international has now made established himself in the league of 30+ Nigerian goalscorers in the Premier League.

Brendan Rodgers’ men don’t look ready to give their place in the top four with the Nigerian setting a personal record for goals in a single Premier League season. He has scored 9 goals this season, one better than the 8 goals he scored for his former club Manchester City in the 2015/16 season.

The Foxes had been on a run of two consecutive losses but bounced back in the first half as they established a four-point gap between them and Chelsea who sit in fourth.

READ: Zidane not distracted by the prospect of facing Chelsea in UCL semis

Kelechi Iheanacho needed the first half of the game to score and add to his highest tally yet of 9 goals in a Premier League season, and 30 in the Premier League since he made his debut for Manchester City in 2015.

Jamie Vardy scored the opener for the home side and Jonny Evans scored the second goal on the night before the Nigerian added the third in the 36th minute.

The Nigerian has been very impressive for the Foxes in recent weeks and he has established himself as the sixth Super Eagles player to score 30+ goals in the Premier League after the likes of Yakubu Aiyegbeni, Kanu Nwankwo, Efan Ekoku, Shola Ameobi, and Peter Odemwingie.