How to Pick the Best Short-Form Game

The gaming industry has never been bigger than it is right now. Today, eSports athletes compete on a global stage to become the world’s greatest individual players or teams. The most popular titles are multiplayer online battle arenas (MOBAs), massively online multiplayer role-playing games (MMORPGs), and first-person shooters (FPS).

As you can tell by the abbreviations, these games are played on a large scale and can be high-stakes. That means that gamers will need to dedicate time and energy if they want to compete at the highest level, or even at an intermediate one. However, that doesn’t mean all gamers have to pursue a career in eSports.

In fact, the world’s fastest-growing category of games is casual mobile titles. These games are played just to pass the time and unwind. As short-form games, they’re designed perfectly for stints in the waiting room or when enjoying a quick break from work. Not sure which short-form game is right for you? Get started with the suggestions below.

Maximize the Excitement with Slots

Slots are the world’s most popular casino game—and it’s easy to see why. For those unfamiliar with how slot machines work via online platforms, you can get started by shopping around for your favorite theme. Slots cover a wide range, from fantasy and mythology to pop culture and TV shows.

From there, keep a lookout for games with a high RTP, which stands for ‘return to player’. Also keep a look out for bonus rounds and features, as these unlock new settings, characters, and symbols.

Train Your Brain with a Puzzle

No matter what kind of puzzle you’re looking for, there’s a short-form game for you. Some players might prefer a simple match-three puzzle, like the famous Candy Crush Saga. Others might want something that involves more critical thinking and memory recall.

In fact, there are dozens of puzzle-based games available that cover hard-boiled brain teasers, like Grindstone and Monument Valley. Others take a more calming approach, like Magic Jigsaw Puzzles—which is a digitized way to access jigsaws on the go.

Keep the Action Going with a Swiper

Want to get that pointer finger moving? One of the most famous casual games that’s categorized as a ‘swipe game’ is Fruit Ninja. The premise of these games is simple: use your finger to make a slashing motion across the screen to slice through the competition.

Along with cutting fruit as a ninja, other popular swipe games are based around flight, not wielding a knife. These include Flappy Bird, which has been around in various forms since 2014. Using similar mechanics as a swipe game, players must keep their character’s momentum going with just a single fingertip. 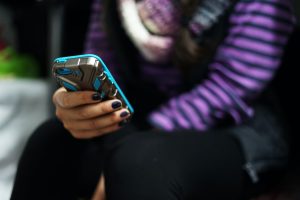 The idea behind casual mobile games is to let players relax via gaming. With this emphasis on recreation, some gamers may shy away from adventure titles. However, if you’re interested in exploring new worlds and staying in the realm of casual gaming, you still have options.

These include titles like Genshin Impact and Oxenfree. The former is one of the world’s most popular games, which can easily be paused and restarted later. The latter is a new title that builds on retro themes from hits like Stranger Things. Both are ideal for more traditional gamers who want mobile titles that can be played at their own pace.

Get Cozy With a Story-Based Title

Other gamers may want a game to feel longer-form. In these cases, story-based games (sometimes called visual novel games) get the job done. These cover a huge range of themes, similar to slots, which means players can select a genre like fantasy, romance, or sci-fi as they shop around.

If My Heart Had Wings, for example, will appeal to fans of Young Adult themes and those familiar with anime. Others, like Gris, take a more metaphysical approach. The simplified mechanics make these games ideal for beginners, while their visual appeal makes them incredibly popular for players worldwide.