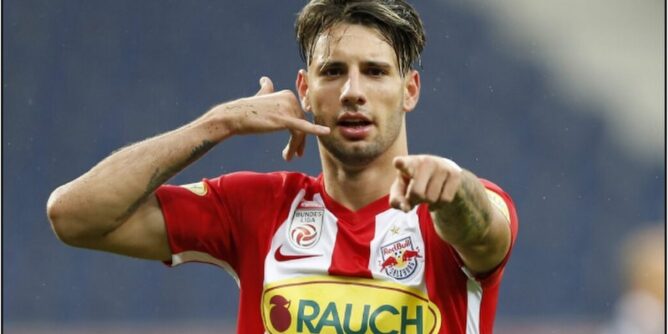 Premier League outfits Tottenham and Arsenal are involved in a transfer battle with top sides in Europe for the signature of RB Salzburg star Dominik Szoboszlai.

The Hungarian has established himself as one of the most promising youngsters in the game in recent times with his performances for the Austrian outfit and has attracted attention from a host of suitors across Europe.

The 20-year-old is valued at around £18million and now has the likes of Tottenham Hotspur, Arsenal, AC Milan, RB Leipzig, and Atletico Madrid interested in his signature according to a report by Eurosport.

Szoboszlai has played 78 times for Salzburg and has 25 goals to his name since making his debut in 2018. The player will now be ready to make that big move and has disclosed this desire.

The Hungarian won’t be short of suitors if the club will allow him to leave as suitors can make their case on why he should favor them over other clubs.

Regardless, it is understood that RB Leipzig have the biggest pull power to seal a deal for the 20-year-old, considering that they are a sister club to Salzburg as they are both owned by Red Bull. This will result in an easy transition for the player who’ll get to play at a high level.

It was gathered that RB Leipzig were disappointed after losing out on Erling Haaland who joined Borussia Dortmund but are very expectant of getting their man this time.

Szoboszlai is currently a Hungary international and has been capped 12 times for his country with 3 goals to his name. The young player started his professional career in Austria with FC Liefering, another club owned by Red Bull before making the move to Salburg in the 2017/18 football season.