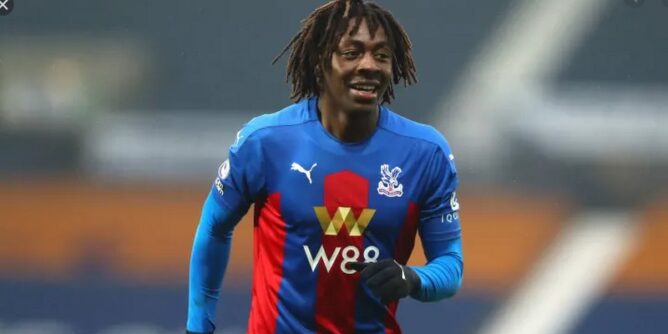 New Crystal Palace winger Eberechi Eze could be at risk of disciplinary action by the FA as they will investigate his presence at QPR’s FA Cup game against Fulham on Saturday.

The winger, 22, sat at the Directors’ box at his previous club to watch their FA Cup third-round tie.

With the new lockdown in the country and with matches still being played without fans, inquiries on if he contravened COVID-19 rules and conventions have risen.

Even though Eze was pictured wearing a face mask as he watched, he didn’t get an endorsement from the FA to go to the match and English football’s overseeing body will investigate the issue.

It seems that Eze was a visitor at QPR. It can be recalled that he left QPR for Crystal Palace in a transfer deal worth £20m last summer.

QPR manager Mark Warburton was questioned on Eze’s presence after the match yet declined to offer any significant remark on the issue. However, he said: “I’ve no idea whether he broke protocols or not.

“You’d have to ask our health and safety officer because that’s above my pay-grade.

“I want to talk about the game. What other players do in their own time, I can’t comment on that. It’s not my area of expertise. Far from it.”

His current club Crystal Palace haven’t commented on the issue although manager Roy Hodgson recently made it clear to the players that no further contravening of the Government’s rules would be condoned.

He made this known after club skipper Luka Milivojevic defied the guidelines on New Year’s Eve.

In any case, the player gave an expression of remorse to the club a week ago after he paid a family unit visit to Fulham striker Aleksandr Mitrovic and his family.

Eberechi Eze will be doing some hoping as the action that will be taken against him is yet to be arrived at.