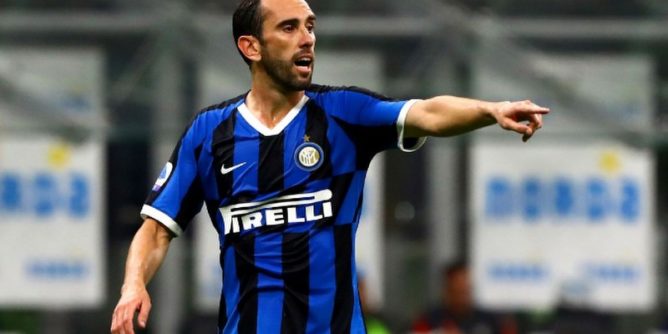 Reports suggest that Everton are planning a surprise summer move for Inter Milan defender Diego Godin. The defender who is now 34 is a key man at Inter under Antonio Conte this season and has made 16 Serie A appearances since joining from Atletico Madrid last summer.

However, it appears that the Italian gaffer has not been significantly impressed with Godin’s performances at the back according to Calciomercato cited by Prince Rupert’s Tower.

Therefore, he will be willing to listen to offers for the Uruguayan when the transfer window reopens, with Everton boss Carlo Ancelotti seeing him as a viable option that will help bolster his squad ahead of the 2020/21 season.

READ: FIFA to prioritize health and safety over football

Diego Godin was a key man in his time at Atletico, as he was the leader at the back in a rock-solid defense that rarely gave chances away to opponents.

It can be agreed that his best years were during his time at the Wanda Metropolitano where he carved a niche for himself as one of the best center-backs and defensive leaders in the game.

These were the qualities that attracted Inter Milan even at a time where he was well past his prime. In his time at Atletico Madrid, he played a vital role in 1 La Liga title triumph as well as participation in two finals of the UEFA Champions League. Sadly, he ended up on the losing side on those two occasions.

READ: Serie A approved to resume on June 20

It is believed that the veteran defender will cost the Toffees around £6-£8million. Meanwhile, Everton suffered a major blow on Thursday after it was announced that summer signing Jean-Philippe Gbamin had been ruled out for another six months with an Achilles injury.

The 24-year-old was signed from Mainz in a £25m deal but has made just 2 appearances as his Everton career ie being hampered by injuries. His last appearance for the Carlo Ancelotti led side came last August in a 1 nil win against Watford.