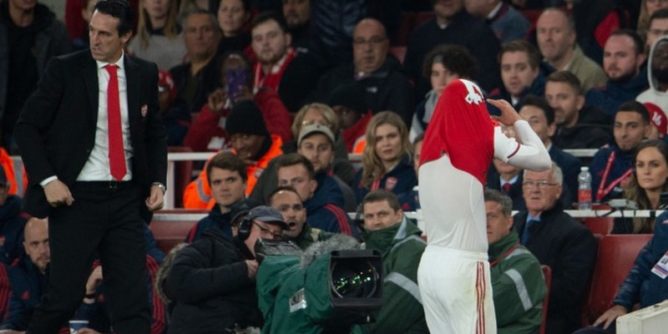 Arsenal boss Unai Emery has admitted that club captain Granit Xhaka was wrong to react angrily to jeers from Stadium fans when he was subbed off in Arsenal’s 2 all draw against Crystal Palace at the Emirates in the Premier League on Sunday.

The two goals for Arsenal came from Sokratis and David Luiz, which gave them a 2 nil lead before a Luka Milivojevic penalty and a goal from Jordan Ayew restored parity for the visiting Eagles before the hour.

Granit Xhaka was eventually replaced by Bukayo Saka in the 61st minute as the Gunners hunted for a victory. As he walked off the pitch, the sarcastic cheers from fans turned to boos as he showed no urgency in leaving the pitch, considering that his side needed a victory.

He responded by cupping his ear to the crowd, took off his shirt and walked straight down the tunnel.

ALSO READ – Depay – Mbappe is extraordinary and an inspiration

Speaking after the game in a chat with BBC’s Match of the Day, Emery said: “He’s wrong but we are going to speak inside about that situation. I want to be calm but really, he was wrong in this action.”

It can be recalled that Unai Emery had no choice but to name a new captain after the departure of Laurent Koscielny for Bordeaux in August. However, the resultant captain, Xhaka, was not a popular choice with some fans of the club.

Meanwhile, Unai Emery will need to get his side back to winning ways after getting just 2 wins in 8 games. They have some challenging fixtures against the likes of Wolves and Leicester City coming up. This will be after the Carabao Cup round of 16 game against Liverpool on Wednesday.