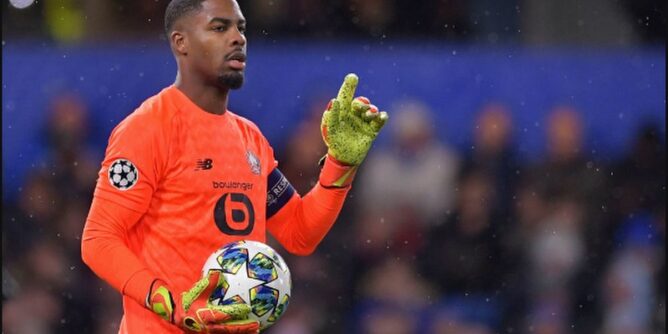 The Spaniard joined Chelsea from Athletic Bilbao for a world-record fee of £71.6million back in 2018 but has failed to live up to the billing despite the hefty price tag and has been recently linked with a move away from Chelsea.

He put in a dismal performance in the 2019/20 season and lost his place to 38-year-old Willy Caballero in the closing stages of the season after the return of football to England in March.

Therefore, the Blues have worked out a list of goalkeepers who can come in to make the competition fierce for the record signing and a new name has emerged alongside the others they’ve been linked to recently. One would wonder who they’d go for as online sports betting centers may have odds on the Blue may eventually end up signing.

GET THE BEST FREE FOOTBALL BETTING TIPS FOR TODAY

According to Sky Sports, Maignan is a possible target for the Blues after impressing at Lille in the 2019/20 season. It is believed that the 25-year-old will be available for around €30m (£27m). The Frenchman is the latest goalie to be linked with Chelsea alongside the likes of Jan Oblak, Ben Foster, Nick Pope, and Andre Onana.

Regardless, Kepa’s future at Stamford Bridge has not been ruled out by Frank Lampard. Chelsea owner Roman Abramovich is keen to make up for the club’s lack of activity in the transfer market due to the two-window transfer ban and has already acquired the likes of Timo Werner and Hakim Ziyech.

The Blues are not done yet with their transfer activities as they are still out for the likes of Leicester City’s Ben Chilwell, Bayern Leverkusen’s Kai Havertz, and Paris-Saint Germain’s Thiago Silva.

These deals are expected to be completed in the coming days based on reports from various news sources. It’s obvious that even if Kepa stays, he will fierce competition next season for a place between the sticks for Chelsea.