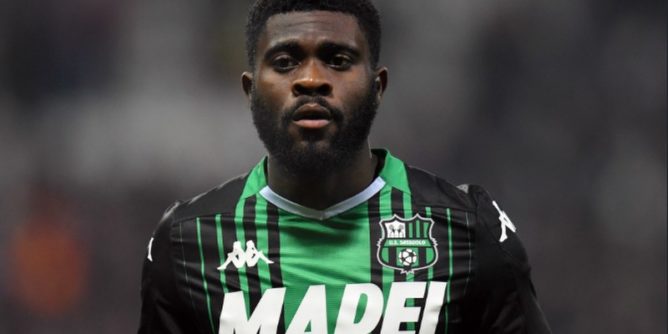 Sassuolo winger Jeremie Boga has pointed out that he is not as skillful as Paris-Saint Germain forward and Brazil international Neymar when it comes to dribbling.

The Ivorian has carved a niche for himself as one of the best dribblers in the Serie A and is currently topping the charts this season with an average of 4.4 dribbles per game.

He is followed by Fiorentina’s Gaetano Castrovilli with 3.2 and AC Milan midfielder Ismael Bennacer with 3.0 dribbles per game.

Boga moved to the Serie A last season and ended up as the player with the most dribbles in that season with 3.3 dribbles per game, before the likes of Josep Ilic with 2.5 and Joao Cancelo with 2.4.

Neymar has been at PSG since the 2017/18 season and made the most dribbles in the league in his first season with 7.1 dribbles per game. Meanwhile, before the 2019/20 Ligue 1 season was called off, he made 6.0 dribbles per game.

In a chat with DAZN, the former Chelsea player said: “I don’t have only one [dribbling skill],”

“Sometimes I like to play with the body pretending in a change of direction.

“I don’t have skills like Neymar who makes numbers. Dribbling for me is this, pretending to go left or right.”

READ: Bayern close in on eighth straight Bundesliga title with a win against Dortmund

The player has been vital for Sassuolo this season with 8 goals and 4 assists to his name in 24 Serie A games. He’s also one of the popular players in the transfer market and has been heavily linked with a return to Stamford Bridge.

Chelsea have the option of signing him at a buyback price of £13 million. However, reports suggest that he will not exercise the option but will make do with a one-off fee if he leaves Sassuolo.

The Ivorian was unable to make it as a regular starter at Chelsea and was sent out on loan to the likes of Rennes in Ligue 1, Granada in La Liga, and Championship side Birmingham City.

He made a combined 92 appearances for the aforementioned clubs before making the move to Sassuolo worth £3.5 million in 2018. Reports also suggest that the likes of Juventus, Napoli, and Roma are interested in the forward.