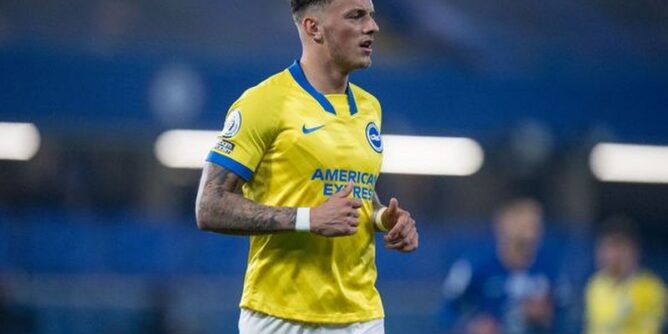 Brighton and England defender Ben White has spoken out concerning his recent Arsenal transfer rumors that have been in the headlines in the past week. The defender has been heavily linked with a move to the Emirates this summer according to a report by The Athletic and other tabloids.

The player who is with the Three Lions in the ongoing Euros has admitted that it is nice to hear that big clubs are interested in his services.

However, Ben White didn’t give out much with regards to a hint concerning the move and also added that players do not talk much about transfers whilst on international duty as it’s unclear what’s true or not concerning transfers till the deal is done.

When asked about the speculations in a chat with talkSPORT, White replied:

READ: Mourinho responds to Totti’s praise on his appointment as Roma boss

“It’s nice, it’s happened quite a lot over the last two years, there’s been a lot of noise.”

When questioned whether he had discussed it with teammates, he added: “Not really. You don’t know what’s true and what’s not. So there’s no real point talking about it.”

Regardless, Arsenal fans are excited by the news of this transfer and will be hoping that the news is made official as soon as possible as the Brighton man looks an ideal signing for the Mikel Arteta-led side.

The Gunners faced a disappointing 2020/21 season as they failed to make it into any of the competitions in Europe ahead of the upcoming season and White seems an improvement to the Gunners’ back-line.

David Luiz will be leaving and it would be the best decision for the club to make the acquisition of the center-back a priority and the 23-year-old might turn out to be the perfect long-term choice for the position.