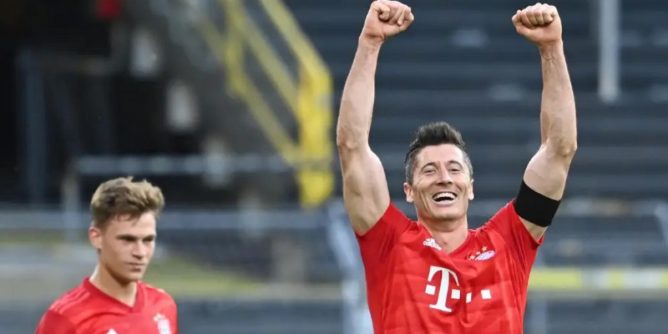 Bayern Munich made it closer to their eighth consecutive Bundesliga title on Tuesday with a 1 nil win over Borussia Dortmund at the Signal Iduna Park in the Der Klassiker derby through a sublime chip by Joshua Kimmich.

The Bavarian giants are now 7 points above second-placed Dortmund with six games left to play. The Brilliant goal by Kimmich, which decided the encounter came in the closing stages of the first half.

It can be recalled that the first encounter between the two sides this season ended in a 4 nil thrashing of Dortmund at the Allianz Arena, and Bayern have maintained that excellent record this season although this was a close encounter.

Erling Haaland was marked off in the game and went off injured in the second half as the pair of David Alaba and Jerome Boateng didn’t give him any room to do damage. He had to go off after being at the end of a hard tackle from Boateng.

Dortmund were unlucky not to draw first blood as an attempt by Haaland which went through the legs of Manuel Neuer in the first minute was cleared off the line by Boateng.

Had it gone in, maybe the game would have taken another turn. However, it was not to be for Lucien Favre’s men.

The deciding moment of the game came in the course of Bayern’s dominance as Kimmich spotted goalkeeper Buerki off his line and made an audacious chip from outside the 18-yard box which beat the keeper two minutes before half time.

The controversial period of the game came when a shot by Erling Haaland was deflected wide by Jerome Boateng’s arm. However, the referee ignored the incident.

Regardless, Bayern were good for the money and held out and could have consolidated on the lead but an attempt from Robert Lewandowski hit the bar. He also had an appeal for a penalty waved off after a supposed push from Swiss defender Manuel Akanji.

The result has put the Bavarian giants in pole position for the 2019/20 Bundesliga title. It’s very difficult seeing anyone stopping them now after emerging victoriously against Dortmund yet again.