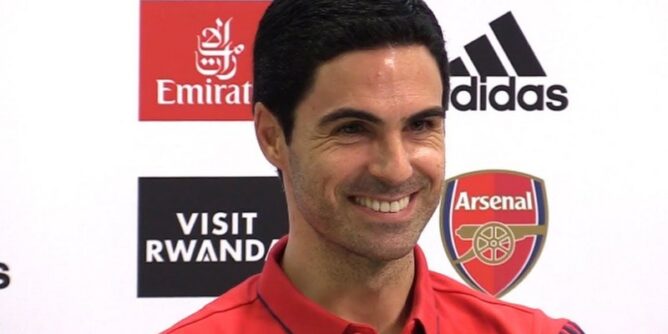 Arsenal boss Mikel Arteta has stated that the club can still attract the best players in the world despite the recent struggles as rumors linking them with a move for Fiorentina forward Dusan Vlahiovic continues to heighten.

The Gunners travel to Anfield on Thursday to face Liverpool in the first leg of their League Cup semi-final clash and sit fourth in the Premier League as they fight to seal a place in the Champions League next season after missing out on the competition for five seasons.

Although the Gunners finished 8th in the past two seasons with no European football to offer, they were the highest spenders in England in the 2021 summer transfer window, signing the likes of Aaron Ramsdale, Martin Odegaard, and Ben White.

Meanwhile, in recent weeks, Arsenal have been linked with a move for Dusan Vlahovic. The 21-year-old Serbian has scored 16 goals already in Serie A this season. When asked about the rumors on Wednesday, Arteta said he would not comment on transfer rumors.

READ: Roma back Mourinho after worst start in 4 decades

READ: The best over 15 goals predictions for today

“Every time I have spoken to any player, they were so willing to come. I haven’t faced any other situation and that’s one of our biggest powers.

“Our capacity to get the attention of people to come and join our club is something that is an advantage for us.”

Thursday’s League Cup semi-final should have been the second leg of the tie between Arsenal and Liverpool but it will be the first as last week’s game was postponed due to a string of positive COVID-19 cases at Liverpool.

However, reports suggest that many of them were false positives and Arteta commented on the situation.

“It’s something that is not in our control,” he said. “The EFL (English Football League) is responsible to check every single player’s status and then make the decision whether the game is played or not.

“The decision was to postpone the match and I’m sure if that was the case, then they had the right arguments to do so.”