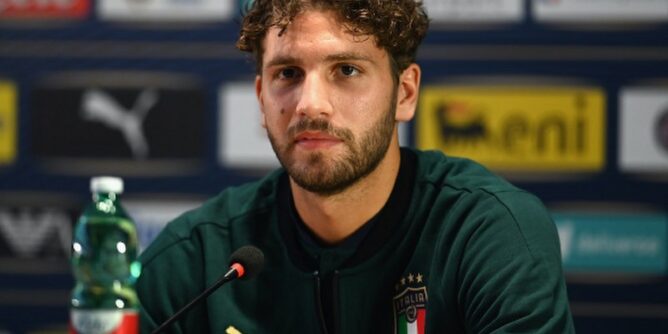 According to Sassuolo chief, Premier League outfit Arsenal are pushing hard to sign Manuel Locatelli and have made an official bid for the Italy star. The Sassuolo midfielder has been impressive for Italy in the ongoing Euros and scored a brace in the 3 nil win over Switzerland in the group stages of the competition.

Arsenal are believed to have been tracking the 23-year old before the competition. Locatelli scored 4 goals and made 3 assists to help Sassuolo finish 8th in Serie A last season, and has also caught the eye of Juventus manager Max Allegri.

Carnevali admitted that Arsenal have stepped up their bid for the midfielder with an important offer but added that the club are more interested in doing business with Juventus as a special relationship exists between the two clubs.

“Arsenal have made an official bid for Locatelli,” Carnevali told Sky Italia, (via Sports Mole). “They’re pushing hard to sign Manuel and it’s an important bid… we will see.

“Juventus also want Locatelli and we have a special relationship with them. A new meeting has been scheduled with Juve.”

Meanwhile, Locatelli has disclosed that he won’t allow himself to be distracted by the various transfer speculations while on duty for Italy in Euro 2020, and will focus on the present reality which is to make Italian fans proud.

“When you’re involved in such an important competition, you’re only focused on the task in hand,” he said last month.

“We see the kids in the street when we travel to our games waving flags, so it’s quite easy to stay focused on the match.

“I’m focused on what happens on the pitch because that’s what is real. Everything else is just gossip and there’s no point worrying about it.”

A report by Eurosport also suggests that Arsenal are battling Manchester United for Ruben Neves and have eyes on Austria midfielder Marcel Sabitzer.

Sabitzer, 27, is set to leave RB Leipzig this summer as he enters the last year of his contract. Bild claim that the Bundesliga club will accept £15 million for Sabitzer, and this makes him around £20million cheaper than Neves.