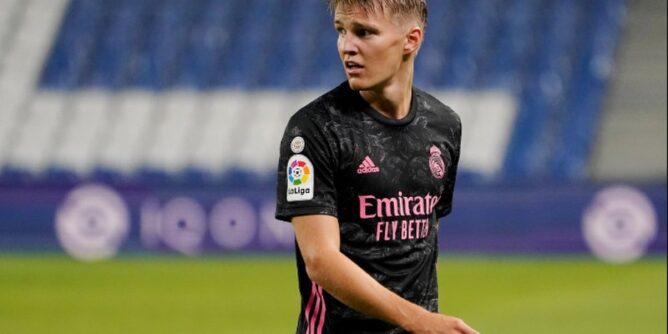 According to a report from Sky Sports, North London outfit Arsenal have approached Real Madrid over the possibility of signing Martin Odegaard in the January transfer window.

The 22-year-old rose to prominence as a teenager after joining Real Madrid in 2015. However, he’s yet to make any significant impact at the Bernabeu as his time at the club has been characterized by loan spells to Heerenveen, Vitesse, and Real Sociedad.

His last loan spell to Real Sociedad saw him impress considerably and this was in the 2019/20 campaign. The playmaker established himself as one of the best attacking midfielders in the league with his performances.

However, on his return to Real Madrid this season, he has not been given enough game time by Zinedine Zidane and one can’t help but question the rationale behind him not allowed to blossom elsewhere on loan.

Odegaard has played just 9 times in all competitions this season and has not scored or assisted a single goal thus far. This is a far cry from his achievements at Real Sociedad last term where he scored 7 goals and made 9 assists in 36 appearances.

The player is obviously unhappy with the chances he has gotten this season and is eager for an exit, putting the likes of Arsenal on alert. With the absence and departure of Ozil, the Gunners have been struggling for creativity in midfield and this affected them in the first half of the season.

However, there has been significant improvement since Emile Smith Rowe was introduced to the side. He has been one of the best performers on the side in recent games and has been providing some of the needed creative sparks.

Arsenal have also been linked with the likes of Julian Draxler, Emiliano Buendia, and Julian Brandt in recent weeks, as they require depth in the number 10 role. Emile Smith Rowe is still young and inexperienced and there is the need for a mature and experienced playmaker in the team.

Meanwhile, Arsenal aren’t the only ones interested in Odegaard as Real Sociedad are interested in taking the player on another loan stint. Therefore, it remains to be seen if the Gunners’ interest in the player will see them get him or not.