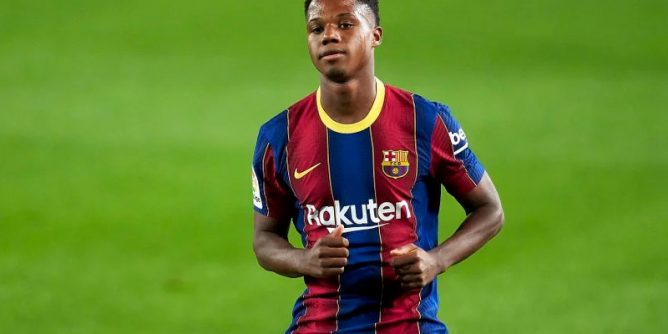 Following the unexpected exit of Lionel Messi from Barcelona, the club have been experiencing turmoil and imbalances both on the pitch and on the book.

Does FATI have what it takes to follow in the footsteps of Lionel Messi? It’s still early days but this remains an unanswered question.

Barcelona are in an era of transition following Leo’s departure after a glamorous and successful laden career. He’s undoubtedly the greatest footballer in Barcelona history.

Barcelona without Messi have been blowing hot and cold and this has left coach Ronald Koeman under intense pressure because of the club’s inconsistency.

Ansu Fati rejoined the team after 10 months on the sidelines. On Sunday, he marked his return against Levante with a goal from the bench scoring the third goal in their 3:0 La Liga game win against Granada.

After netting the third goal, he celebrated with his teammates and was quick to praise the club’s medical team who treated and aided his recovery back from his knee injury.

In his statement, “Thanks to the doctors and everyone who has been with me through all this, and the fans who have been unbelievable”

The number 10 jersey was vacant for the player to take and the most fabled number 10 has been given to the teenager. Fati, who wore number 22 last season, is considered the great shining light for Catalonia’s post-Messi era.

Fati during interviews said “I am proud to wear the 10 after Leo, happy with the club, opportunity, and the belief they have in me, We are Barca and we have to aim to win everything – La Liga, Champions League, all the competitions. We have to fight and work for that.”

Barcelona would proceed in their champions league campaign against Benfica on Wednesday, having lost the first to Bayern Munich at Camp Nou in a disgraceful version.

The Bavarians defeated the home side 3 nil. The Catalonia-based club need to have a good result on the road if they’re to qualify to the next round from Group E.