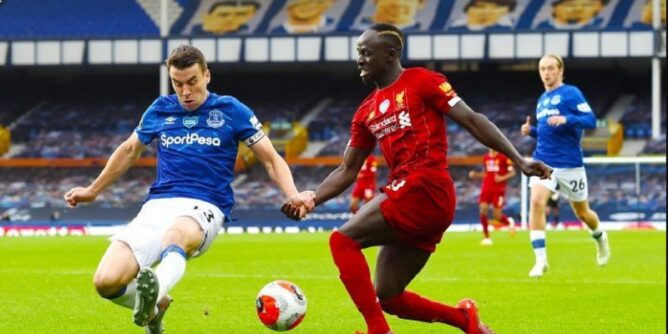 The 2020/21 Premier League season’s major surprise thus far is seeing Everton at the top of the log after four games amid an enviable 100% record. The Toffees have been phenomenal under Carlo Ancelotti this term, although it’s still early days.

Their biggest summer signing James Rodriguez has also hit the ground running after the move from Real Madrid while striker Dominic Calvert-Lewin can easily pass for a new signing.

However, they’ll be tested by their Merseyside neighbors when the Premier League resumes after the international break. I can bet that the first Merseyside Derby of the 2020/21 Premier League season will produce fireworks.

Everton are enjoying a rich vein of form while Liverpool have started on a high, although there is the little issue of the shocking 7:2 loss to Aston Villa at Villa Park on the last day before the international break.

The Toffees last won the Merseyside Derby in the Premier League in 2010 and it was at Goodison Park. Since then, the Reds have been overwhelming favorites in this fixture with the highest number of wins and a series of draws in between.

However, this fixture will be different as Everton stand a chance in this one. First off, Liverpool’s first-choice goalie Alisson Becker will be absent from the game.

Regardless, I daresay this may not be a big advantage as Jermaine Pickford hasn’t been top-notch either in these early stages of the season.

Both sides have scored 12 goals this season and only Tottenham Hotspur can equal that number. However, the Toffees have conceded 5 while Liverpool have conceded 7.

The next matchday will see the two sides looking to prove a point. Everton will be eager to prove that their early season form is no fluke and will want to prove their readiness and consistency.

Liverpool, on the other hand, will be looking to point out that the result against Aston Villa was a one-off and will want to bounce back with a statement win. It will be a cracker as Carlo Ancelotti and Jurgen Klopp go head to head against each other for the first time this season.

This is one Merseyside Derby that sees Everton with a decent chance of garnering maximum points unlike in previous derbies and this is a good sight.

A local derby should be tough and not one-sided, especially when it’s one of the biggest and fiercest derbies in English football.

Brace up, folks! We have an eventful and evenly poised Merseyside Derby for the first time in years and we look forward to a cracking game.